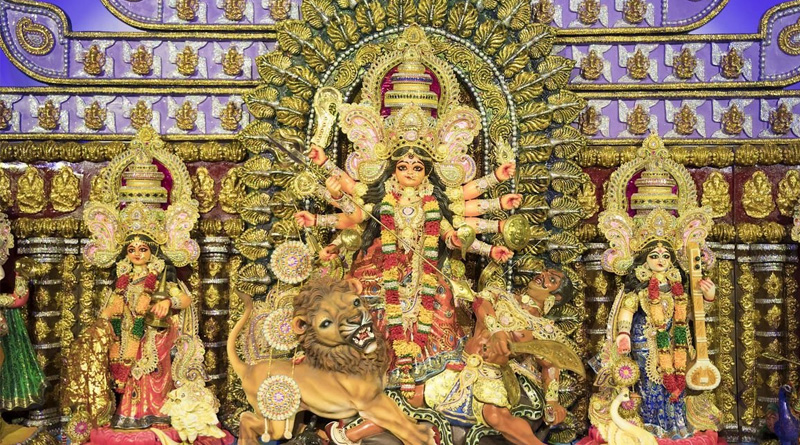 Navyendu Hazra: Not 108 lotuses, 108 lily flowers are given to mother’s feet here. Because lotuses do not bloom in this country. Lilies look a lot like lotus flowers. So this local flower is given during sandhi puja. The Puja of Ireland Durgotsava Committee is six years old this year. Puja is done here according to the rules of Belur Mutt Ramakrishna Mission. Anjali on Ashtami, Kumari Puja on Navami. Everything happens. But this time the biggest attraction of the puja here is the priest training camp. The promoters say that this idea is to meet the shortage of priests abroad during the puja. Five Brahmins from Ireland received priestly training from a Calcutta Vedic Tol scholar. Then they again trained several people there as priests. The aim is only one, to make more thakurmshai for puja in that country.

The frenzy of Bengalis around this puja in Dublin, Ireland is visible. This time Ashtami and Navami puja will be held here on the same day. So Puja is one day less. But so what! The Bengalis of Ireland are ready to celebrate the rest of the days. After wearing new clothes, they want to spend a few days of Puja eating and drinking, chatting, cultural programs etc. But not only Puja. Mahalaya day tarpan is also organized here.

The promoters of this puja said that their five Brahmins trained online with a toll scholar in Calcutta. At the end of three months, the certificate is also received. Two of them are performing two pujas this time. These five in turn trained five Brahmins from the surrounding towns as priests. The idol made by Kumortuli artist reached the country last year. It was learned from the entrepreneurs that there are ten pujas around Ireland. Cultural programs are held every evening during Puja days. Sindurkhela on tenth. After the puja, Lakshmi Puja will be held here on October 9. This puja has also been awarded as the best puja in Europe in some categories in the past. Entrepreneurs said that six to seven virgins dress here every time. Little girls are not prohibited if they want to dress up. But one remains the original virgin. 8 to 10 year olds dress as virgins. Puja official Shaswat Chattopadhyay said, “Puja has started. Every time we do something new. This time like priest training camp. The rest of the scriptures follow all the rules in our Pujas in Ireland.”

funny incident: A child who says she will become old...

Stone pelting in Garba, police beat up the accused by...

terror encounter in Shopian – Clash between army and terrorists...

Terrible accident on Bandra-Worli sea link, three vehicles collided with the ambulance that came to take the injured, five died | Collision between...

funny incident: A child who says she will become old if she always studies 🥰😂..(Video) | A little boy who says that if...