Elections are scheduled for June 10 for 57 Rajya Sabha seats in 15 states. The term of the MPs of all these seats is coming to an end between June and August.

Recently, Gautam Adani’s (Gautam Adani) Rumors were flowing about entering politics. In this regard, Adani Group (Adani Group) Has been clarified by. The Adani Group on Saturday issued an official statement saying that Gautam Adani’s politics (politics(No interest. It is to be noted that elections for the vacant seats of Rajya Sabha)ELECTION) Announced. Reports then claimed that Adani Group owner Gautam Adani or his wife Preeti Adani had been nominated to the Rajya Sabha by any political party.Rajya Sabha) Can go. Following the news, the Adani Group was forced to make a statement.

The Adani Group wrote in its statement – some people are tarnishing the image for their own benefit. The Adani group wrote on social media: “We are aware of the news, which is saying that Gautam Adani or Dr. Preeti Adani may be given a Rajya Sabha seat. This news is false. Such news seems to come whenever there is a vacancy in the Rajya Sabha. It is very unfortunate that some people are pushing our name in their report for their own benefit. Gautam Adani, Preeti Adani and any member of the Adani family have no interest in political career or joining any other political party. 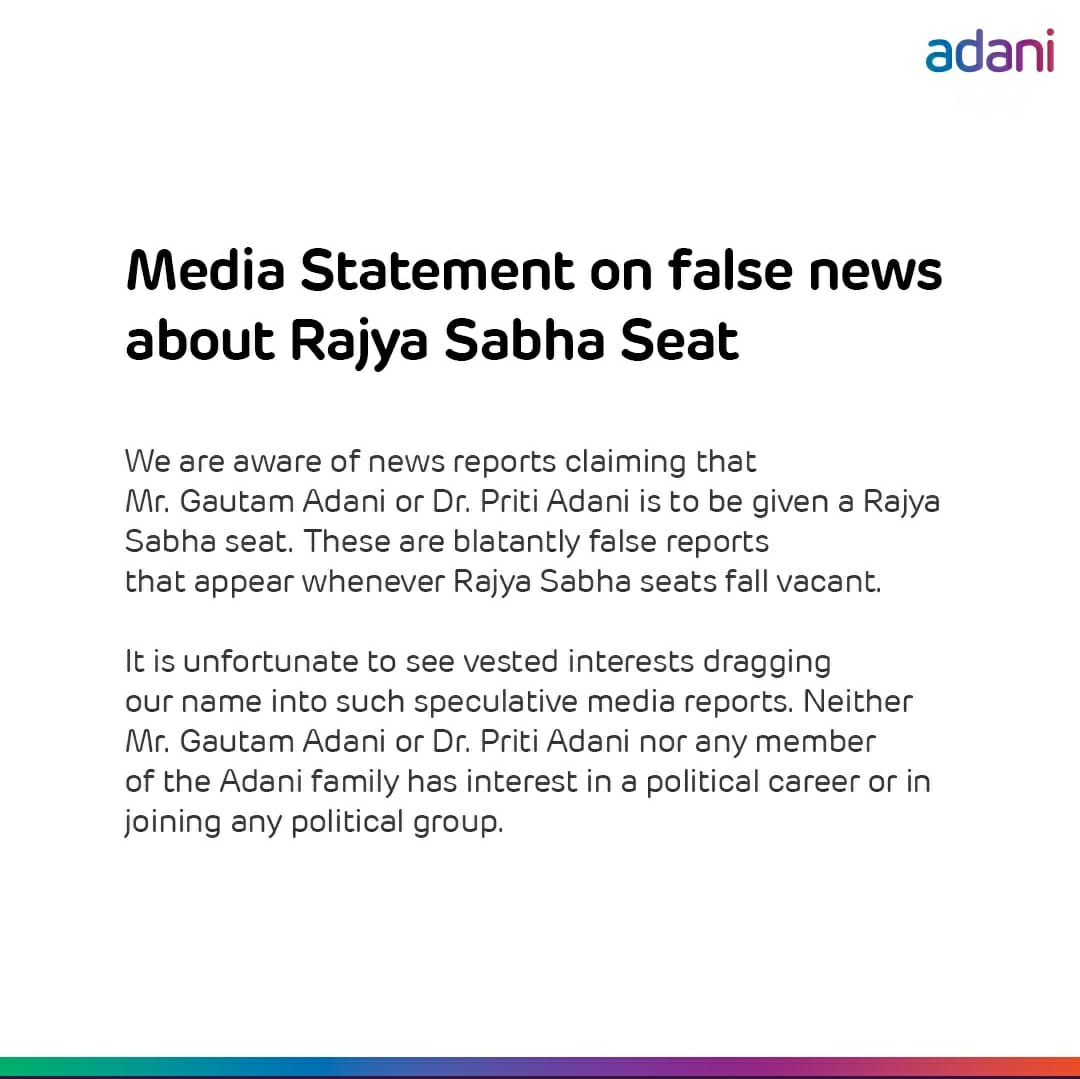 One of the reports claimed that a member of the Adani family could be sent to the Rajya Sabha from Andhra. Recent reports have claimed that lobbying for 4 Rajya Sabha seats in Andhra Pradesh has intensified in June. On 21st June V. Vijaysai Reddy, T.D. Venkatesh, Y.S. Chaudhary and Suresh Prabhu are retiring. 6 names are running for their seats. The names of Adani family members were also included.

Reports also claim that Andhra CM Jagan Mohan Reddy may consider sending Gautam Adani or a member of his family to the Rajya Sabha if such a request is made by Gruth.

Voting for 57 Rajya Sabha seats is scheduled for June 10

Elections are scheduled for June 10 for 57 Rajya Sabha seats in 15 states. The term of the MPs of all these seats is coming to an end between June and August. The BJP is also eyeing a majority in the Rajya Sabha. Out of 245 seats, BJP has 101 seats. Their numbers will increase after the election.

Environmental protection should be transformed into a people’s movement: Union Minister Bhubaneswar Yadav

Weekly Horoscope (May 22 to May 28): These 5 zodiac signs including Aries-Libra will get big success this week PiPa News

Russia’s war on Ukraine can only be resolved through ‘diplomacy’, says Volodymyr Zelensky

The 15th Assam Legislative Assembly completed its year on Saturday! Take a look at what has been done this year …

Shirin Mazari named the person who made the arrest PiPa News

Coimbatore students who qualified for the International Alpine Skating Competition .. Who are they?