A search operation was carried out by army forces in Kalai Top, Shindra, Ratta Jabbar and adjoining areas, assisted by police and CRPF. 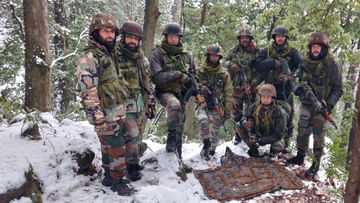 The Army discovered the hideout

For Republic Day (Republic Day celebration) before Wednesday in Jammu and Kashmir (Jammu and Kashmir) in Poonch (Poonch) Army busted two hideouts of militants. An army officer said that one hideout was breached in Ratta Jabara forest and another in Dhoba forest. A search operation was conducted in Kalai Top, Shindra, Ratta Jabbar and adjoining areas by army forces assisted by police and CRPF. Two AK rifles, three magazines and 35 rounds of ammunition were recovered during the search operation, he said.

Earlier on January 15, security forces had raided a terrorist hideout in Poonch and seized a huge quantity of arms, ammunition and explosives. A hideout was busted in Bahaian Wali village of Surankote tehsil in a joint operation by police and army.

Jammu and Kashmir | Indian Army busted two hideouts in Poonch. One hideout has been busted in Ratta Jabara forest and another in Dhoba forest. Large quantity of arms and ammunition recovered from these hideouts: Army pic.twitter.com/4gLoqX0bre

Illegal stone quarries in Coimbatore? The court ordered the...

No raids, routine inspection: Adani’s clarification on raids in Himachal ...

The police sent an ambulance for the person carrying his...

Bongaigaon: Death of 16-year-old pregnant girl, who was married earlier...

Crime: Daughter suspected of illicit relationship for finding pregnancy kit in bag; The parents who killed the girl and put acid on her...