Arshdeep Singh, IND vs SA 3rd T20 | Was another player injured? This player did not play in the last T20 match due to pain Pipa News

Arshdeep Singh, IND vs SA 3rd T20 | Was another player injured? This player did not play in the last T20 match due to pain 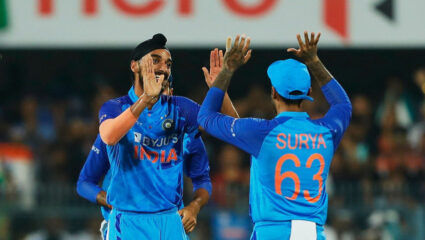 New Delhi: India had to face a crushing defeat in the third T20 match (IND vs SA 3rd T20) against South Africa played in Indore on Tuesday. Not only this, apart from this defeat, the tension of the Indian team has also increased. Actually, in this match, Team India made three changes in the playing-11. In which a change was also seen regarding Arshdeep Singh.

Actually, Arshdeep Singh was not included in the playing 11 of Team India in this last match. He was rested from this match. Regarding fast bowler Arshdeep Singh, captain Rohit Sharma said that due to back pain, Arshdeep is not part of the playing-11, so it has been decided to give him rest. However, Rohit also told that nothing is serious, only Arshdeep has been rested to protect him so that he does not suffer further.

Rohit Sharma told that, Arshdeep Singh’s back pain is not serious, but still it has become a matter of concern for the fans. Because, now that the T20 World Cup is ahead, this back pain of Arshdeep Singh should not create trouble for the team. At present, the reason for the injury of the players getting Team India is very upset.

Before the upcoming World Cup, many key players of the Indian team are not participating in this tournament due to injuries. In such a situation, the heartbeat of the fans has increased after hearing about Arshdeep Singh’s back pain. However, captain Rohit has not described his pain as serious, which is also a matter of relief somewhere.

Hubli Violence: Accused Petition to the Supreme Court to cancellation...

KCR’s reaction on ED attacks.. Are you going to respond...

KCR’s reaction on ED attacks.. Are you going to respond in that assembly itself?– News18 Telugu Pipa News