Chanda Fort Railway Station | Alternate arrangement on increase in traffic on original Maldhakka, physical facilities will be made at Chanda Fort railway station 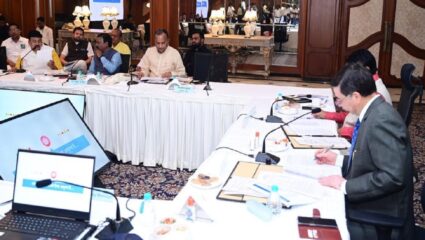 chandrapur, MP Balu Dhanorkar always raises his voice in the Lok Sabha to solve many serious issues of the Lok Sabha constituency. Recently, in the meeting of South East Central Railway held in Nagpur, he raised various issues and directed the General Manager of Railways to remove the route immediately. Along with this, MP Balu Dhanorkar said that these problems will be resolved in the presence of concerned officials and Union Railway Minister in Delhi.

MP Kripal Tumane, MP Ashok Nete, General Manager South-East-Central Railway Bilaspur, Divisional Railway Manager Nagpur were present on the occasion. Railway yard Maldhakka was established near the grounds of Karmaveer Mahavidyalaya School in the core of Chandrapur district. The health of the students and the natives is being threatened by this yard. That’s why MP Balu Dhanorkar demanded to shift this railway yard to Maldhakka. Taking cognizance of this, the Railway Administration said that loading-unloading is very less on this freight track and an alternative place is also being searched.

Chanda Fort Railway Station is an important link connecting Chandrapur city to the rural areas. Thousands of passengers travel daily from this area. But due to lack of physical and security arrangements at Chanda Fort railway station, passengers are facing a lot of trouble. That’s why MP Balu Dhanorkar had repeatedly demanded to provide facilities here by correspondence. According to this, two RPF security guards, 11 LED lights, 19 street lights on the way to the railway station, 30 LED lights on the platform, 17 CCTV cameras including LED lights will be installed at other places. This will solve the security problem at this station.

Along with this, stoppage of Bilaspur-Chennai Central 12851/12852 at Chanda Fort by South-East-Central Railway, extension of Jabalpur-Chanda Fort train number 02274/02273 to Ballarpur railway station instead of Chanda Fort, etc. were kept in the meeting. MP Balu Dhanorkar expressed deep displeasure with the Railway Board for not following all these proposals properly. He said that he would soon hold a meeting with the Railway Minister along with officials and concerned MPs in Delhi.