Chann Pardesi Song Out | The song ‘Chan Pardeshi’ from the film ‘Goodbye’ was released, Amitabh Bachchan and Neena Gupta’s chemistry was seen 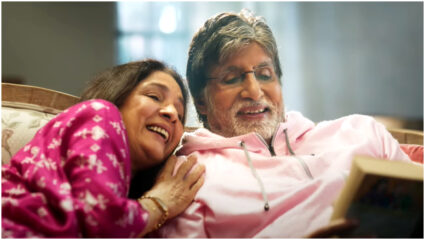 Mumbai : The upcoming film ‘Goodbye’ starring Bollywood megastar Amitabh Bachchan and South actress Rashmika Mandanna is in the news these days. To see this film, the fans are eagerly waiting for its release. At the same time, now another new song of this film has been released. The title of this song is ‘Chan Pardeshi’.

The chemistry of actor Amitabh Bachchan and actress Neena Gupta is being seen in this song. A glimpse of Rashmika Mandanna is also being seen in the video. The song ‘Chann Pardeshi’ is sung by Amit Trivedi and he has given music to it while Swanand Kirkire has written the lyrics.

It is worth noting that for the first time through this film, Bollywood veteran Amitabh Bachchan and Neena Gupta will be seen as an onscreen couple. Which is going to be very interesting for the fans. This song has been released on Zee Music Company’s YouTube channel. Which has got more than 34 thousand views so far. Apart from Amitabh Bachchan, Neena Gupta and Rashmika Mandanna in this film, Pavail Gulati, Elli Avram and Sunil Grover will also be seen in their important roles. The film will be released in all theaters on 7 October 2022.