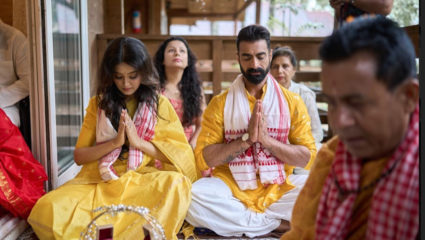 Mumbai: Choreographer Tushar Kalia on Sunday announced that he has engaged Triveni Burman, a model by profession. The choreographer shared the pictures of the ceremony and informed the fans about it. In the photos, Tusshar and Triveni are seen performing rituals. Both also posed together for the photographers. Sharing the pictures on Instagram, Tusshar wrote, ‘For a new beginning. Send us your love and blessings.’

As soon as Tusshar shared the photo, his friends from the industry congratulated the couple. Pulkit Samrat, Karan Johar, Shashank Khaitan and others have posted comments on the post. Fans have also congratulated this couple. One comment read, “Wishing you a lifetime of happiness while another fan said, “Heartfelt congratulations to both of you.”

Tusshar made their relationship official earlier this year. In March, the choreographer shared stunning pictures with Triveni and wrote- ‘Couldn’t have asked for anything more on my birthday. The best gift ever.’

Let us tell you that Tusshar will be seen in the upcoming season of Khatron Ke Khiladi. Packed with daring stunts, Khatron Ke Khiladi 12 will give these popular personalities a chance to fight their biggest fears. The shooting of the Rohit Shetty-hosted show will begin this month. Apart from Tusshar, the show will also feature celebrities like Bigg Boss 15 fame Nishant Bhat, Bigg Boss 14 winners Rubina Dilaik and Sriti Jha, Mr. Faisu, Kanika Mann, Rajiv Adatia, Shivangi Joshi, Erica Packard and Chetna Pandey.

The headmistress, who was carrying beef to school, was arrested on suspicion of hurting religious sentiments.

The suns are burning .. the rains are overflowing .. India is satisfied with climate change | A study has revealed about climate...

No matter if security committee meeting is called, MQM

Another Rs 500 crore per month with hike in liquor rates

This was the giant Sai, the house of the jinn … the blue waters of Lake Seo Shar were still sleeping covered in white...

GT vs RCB IPL 2022: After defeating Gujarat Titans, RCB on the threshold of playoff, fate decides at the hands of Delhi PiPa News