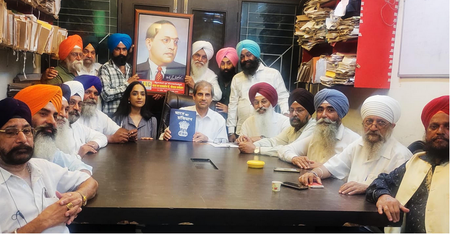 New Delhi, (Manpreet Singh Khalsa)-: National convener of “Mission Constitution Bachao” of the office bearers of Political Sikh Prisoner Rihai Morcha (Delhi) with Advocate Mahmood Pracha and Doctor Ritu Singh working for the rights of Dalits to advance the campaign for the release of Bandi Singhs. During the meeting, it was revealed that there was a constructive discussion. It has been decided in this meeting that the two organizations will jointly launch a legal battle for the release of Bandi Singhs as well as a social awareness campaign “Constitution Says – Bandi Singh Raha Karon” campaign. As part of the first link of this campaign, on Sunday 25th September 2022 at 1 pm outside the Tilak Nagar metro station, people will be made aware by holding placards in their hands by the activists of both organizations. Giving more information about this, Rihai Morche core committee members Chaman Singh, Avtar Singh Kalka, Dr. Parminder Pal Singh, Iqbal Singh, Gurdeep Singh Mintu said that Advocate Mahmood Pracha has been prosecuting Bhai Jagtar Singh Hawara in the courts for a long time. are So they have good knowledge about the affairs of Bandi Singhs. Before this, during the 31-day march at Gurdwara Bangla Sahib, the devotees were given complete information about the Bandi Singhs. Therefore, during the next phase of the awareness campaign, publicity will be done outside metro stations and during Nagar Kirtans with the aim of conveying information about the legal rights of Bandi Singh to the general public.

The leaders said that the management of the Singh Sabha Gurdwaras will also be contacted to enforce the orders given by the Jathedar Shri Akal Takht Sahib to put up boards outside the Gurdwara Sahibs regarding the Bandi Singhs. Apart from this, the leaders of the release front will contact the MLAs of Delhi, Nigam Parshad and Delhi Committee members with a letter to get their yes or no regarding the release of Bandi Singhs. Since we are demanding the release of the Bandi Singhs because of the rights given to prisoners by the Constitution of India, we have formed a strong front with Dalits and backward class people to unite the people who have faith in the Constitution with our campaign. making or being So that through social consciousness, governments can be forced to release the captive Singhs. But parallel to this our legal battle will also continue. Members of the Working Committee of the Liberation Front were also present on this occasion.

This entry was posted in Punjab, Main News.

CPI Srimanta Illala is an efficient officer- May he get...