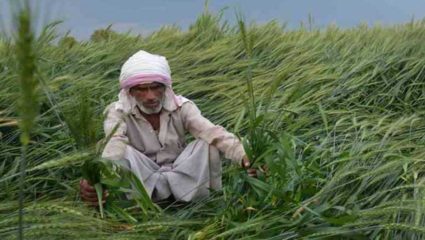 Nandgaon Khandeshwar (No.), Due to excessive rainfall in the tehsil, more than 70 percent of thousands of hectares of crops have been destroyed. To compensate for this loss, the farmers took out crop insurance by adding money. But the insurance representatives, who came to do Panchnama on behalf of Agriculture Insurance Company of India Limited Company, are doing Panchnama by charging Rs 100 to 200 from each farmer and it is going on in the entire district including Tehsil. This type of incident is happening in front of the eyes of the insurance officers and farmers are being looted on a large scale without any hindrance by the crop insurance company.

On behalf of the company, the insurance representative is given a commission of more than Rs 100 in each panchnama, yet the insurance representative is collecting it from the farmers. In Nandgaon Khandeshwar tehsil, so far about 50 percent Panchnama has been completed and lakhs of rupees have been paid to the farmers. The farmers have become miserable even before the heavy rains. He has taken insurance in the past but has not received any compensation, he has also gone to the door of the Farmers Insurance Company and is suffering.

Doubts on the role of Agriculture Department

Despite the crop insurance company being under the control of the Agriculture Department, this kind of incident is happening, now the agriculture department is being questioned. Not only this, insurance representatives from districts like Osmanabad, Nanded are living on rent in Nandgaon and looting the farmers on a large scale by doing Panchnama in the entire tehsil. Along with this, the insurance representative is in touch with CSC and is also doing Panchnama of ineligible people by paying commission to many people. Therefore, there is a demand from the farmers of the tehsil that legal and penal action should be taken against the concerned insurance representatives.

Today is December 6th! Hindu Mahasabha has announced the...

The Winter Session of Parliament will convene tomorrow Pipa News

In Chhotaudepur, the fight between ‘heirs’ saw voting fall by...

The car fell into the canal, 4 people including 2...

No political colour, priority at G20 is national interest: Even...

pune live news, Pune: Constant suspicion, then the argument between...

Today is December 6th! Hindu Mahasabha has announced the recitation of Hanuman Chalisa in the royal Idgah of Mathura, police-administration alert Pipa News

The Winter Session of Parliament will convene tomorrow Pipa News

In Chhotaudepur, the fight between ‘heirs’ saw voting fall by 11.05 per cent Pipa News

The car fell into the canal, 4 people including 2 children died Pipa News