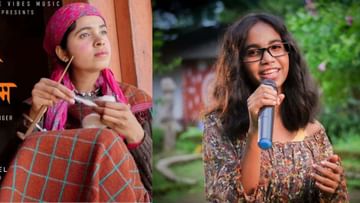 Both sisters are very talented

Dang(Dang) Two sisters, Mona and Simran, who grew up in Chankhal, a small village of Ahwa taluk of the district, are going to create a distinct identity on the global stage through a patriotic song. Among the two sisters, elder sister Mona is establishing herself as an actor, director and a good choreographer while younger sister Simran will showcase her singing talent with her melodious voice to the tune of the nationwide Vande Mataram patriotic song on 7th August. The patriotic song sung by 14-year-old Simran Patel, nicknamed Dang ni Pahadi Chidia, is expected to be very influential.

On August 7, it will be released on around 40 platforms worldwide

“Patriotic song Vande Mataram” will be released simultaneously on 40 different platforms around the world like Spotify, jiosaan, gaana, youtube which is produced by Hongkong based Jaykishan Patel.

The song has been shot at different locations in the Indian states of Jammu, Kashmir, Ladakh, Rajasthan, Kerala, and Gujarat.

Dang’s renowned actress Mona Patel has acted in this Vande Mataram song while 14-year-old Simran Patel popularly known as Dang’s Pahadi Chidia has sung the Vande Mataram song. It is worth mentioning that these two are expected to prove inspiring for Dang’s daughters. These two daughters will be proud of Gujarat and India through the campaign of exposing patriotism through the medium of film.

Mona Patel has earned a good place on the silver screen of TV with her acting. After joining acting at the young age of just 10 years, he has worked with many legendary actors and directors including superstar Amri Khan. Mouli, a child artist film based on drug addiction, was loved by people. Simran has also created her albums at a very young age and has shone on different platforms. Mayanagari did not fall in love with Mumbai, both the sisters have decided to pursue their careers under the guidance of their father.

Dadhikado playing on the occasion of Janmashtami in Nishiganj – Uttarbanga Sambad