Avravaran Chatterjee, Siliguri: The GTA election is not now, we want a lasting political solution in the mountains. Morcha leader Bimal Gurung wrote a letter to Chief Minister Mamata Banerjee raising this demand. In a letter on Saturday, he said a lasting political solution had to be found in the mountains. The GTA agreement must be fully implemented. Only then can the GTA be elected. Taking part in a one-party program in Darjeeling on the same day, Gurung warned that if the GTA was forcibly elected, he would go on a hunger strike. 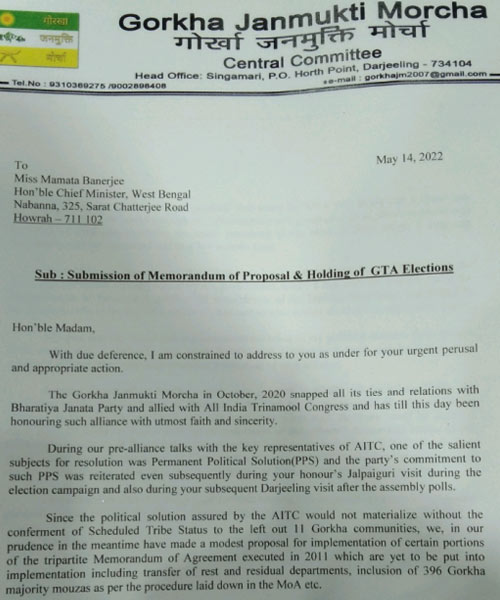 During his recent visit to North Bengal, the Chief Minister announced that the GTA Election would be held in the hills by June. After the expiration of the term of GTA in 2016, work was being done by appointing an administrator there. This time it is the turn of forming a new board of GTA through re-election. Therefore, the state government has agreed to hold quick elections without delay. This announcement of the Chief Minister was initially welcomed by the political leaders of the hills.

But on Saturday, Bimal Gurung, a once dreadful leader of the hills, wrote a letter to the Chief Minister with a completely different demand. Gurung, former president of Gorkha Janmukti Morcha, claims that the Morcha has an alliance with the Trinamool. There is no need to walk the path of election right now. Instead, the state government should fulfill all the demands as per the GTA agreement. Let there be a lasting political solution in the mountains. If necessary, the government should convene a tripartite meeting to discuss. For that he is ready to come to Calcutta himself. After all, elections can be considered.

After attending a one-party meeting in Darjeeling in the afternoon and handing over a letter to Gurung GTA election and Mamata Banerjee, he said that if GTA election is held by force, he will go on a hunger strike at the crossroads. In this context, the grassroots leader of the hill Binoy Tamang said, “I have nothing to say about the decision of the Morcha party. They want GTA, they want a lasting political solution, they said in Kolkata. So the leadership of Kolkata will decide on this. ”

Pegasus Case: The tenure of the committee probing the Pegasus espionage case extended by four weeks, the SC said- speed up the work PiPa...

Tomatoes competing with gold .. selling for Rs.100 per kg ..! – Housewives in turmoil

snake bites | Why do snakes bite? What to do immediately after a bite?

The angry mother of the groom climbed the stage with slippers in her hand at the time of the garland, see how the ruckus...

In a few minutes, storm and rain changed the picture of Patna PiPa News