Everything is ready for the installation of a huge statue of Sri Ramanujacharya Swamy .. Invitation of Chinnajir Swamy to the Governor, CM of Haryana | Inauguration ceremony of statue of equality from february 2 gujarat haryana governors chief minister invited by chinna jeyar swamy

Everything is ready for the installation of a huge statue of Sri Ramanujacharya Swamy .. Invitation of Chinnajir Swamy to the Governor, CM of Haryana | Inauguration ceremony of statue of equality from february 2 gujarat haryana governors chief minister invited by chinna jeyar swamy 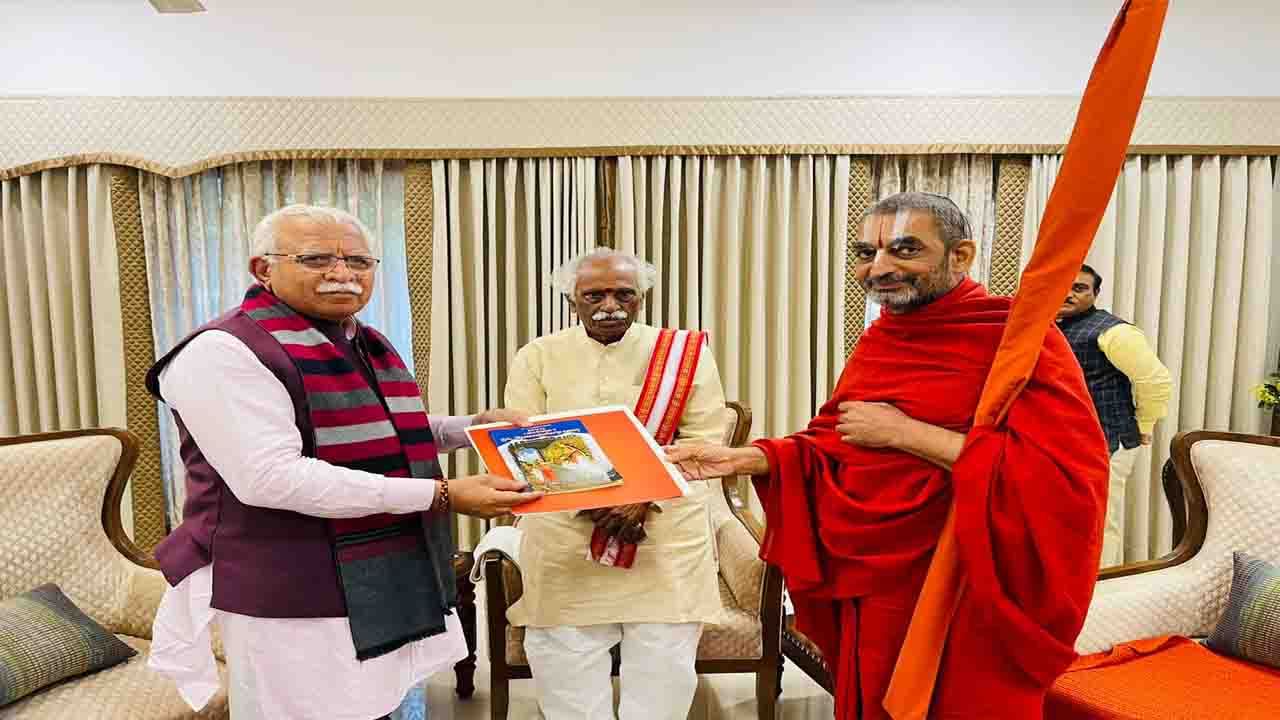 Statue of Equality: Haryana Governor Bandaru Dattatreya and Chief Minister Manohar Lal Khattar were invited to inaugurate the ‘Sri Ramanuja Millennium’ to mark the 1000th birth anniversary of Sri Ramanujacharya Swamy. Tridandy Chinna Jiyar Swamy invited them to meet him in Chandigarh on Thursday. Later, Chinna Jiyar Swami met Acharya Devavratna, the Governor of Gujarat and extended an invitation to him to attend the ceremony.

A function will be held in memory of Sri Ramanujacharya Swami. Sri Ramanujacharya Swamy was born in 1017 in Sriperumbudur, Tamil Nadu. His mother’s name was Kantimati and his father’s name was Kesavacharya. Devotees believe that this incarnation was taken by Adi himself. Sri Ramanujacharya was an 11th century Hindu theologian and philosopher. Was the first proponent of equality for all human beings. Tridandi Chinna Jiyar Swami is preparing to hold his Jayanti celebrations from February 2 to February 14, 2022. Chinna Jiyar Swamy is inviting celebrities from all over the country and abroad for the inauguration of ‘Sri Ramanuja Sahasrabdi’. He was accompanied by President Ram Nath Kovind, Vice President Venkaiah Naidu, Prime Minister Narendra Modi, Union Ministers and Chief Justice of the Supreme Court Justice N. V Ramana. 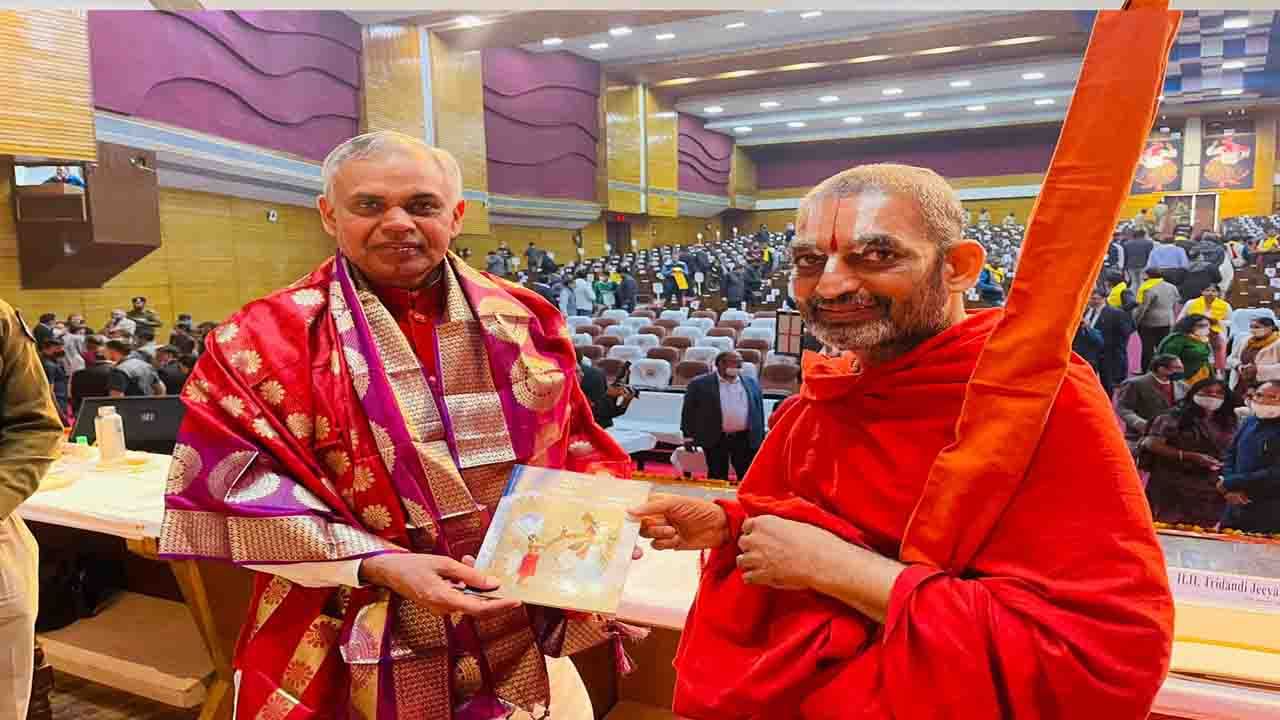 The 1000th anniversary celebrations will begin with the installation of a huge idol of Sri Ramanujacharya Swamy at the new ashram in Shamshabad, a suburb of Hyderabad. A 216 feet high statue of Swamiji was erected. It is the second tallest statue in the world. Ramanujacharya worked hard to protect the right of all devotees to worship their deities. He named the statue the ‘Statue of Equality’.

The ‘Statue of Equality’ was built on more than 200 acres of land at the Muchhinthal Ashram. The millennial Lakshmi Narayana Yagya is performed for the welfare of the people. Nearly two lakh kilos of cow ghee will be used in the 1035 Havan pots built for the mega event. Chin Zeer’s dream is that the huge spiritual center in Muchhinthal, the “Divine Sacrifice”, will soon become a world-famous spiritual place. Rs 1000 crore has been spent on the mega project. It is reported that more than 1800 tons of punch iron is being used to make the statue. 108 Divyadesa temples are being constructed around the park. Carved stone pillars are a special attraction in Rajasthan.

Ramanujacharya Swamy was born in 1017 in Sriperumbudur, Tamil Nadu. His mother’s name was Kantimati. Father’s name is Hairdresser. Devotees believe that this incarnation was taken by Adi himself. Kanchi studied theology at Advaita scholars. He explained the Visishtadvaita doctrine and made temples the center of religion. Ramanuja received Vaishnava initiation by Yamunacharya. His great-grandfather Alvandaru was a priest at the Srirangam Vaishnava Math. ‘Nambi’ Narayan preached mantra initiation to Ramanuja. Thirukosthiyaru explained the importance of the ‘dual mantra’. Ramanujan was asked to protect the privacy of the mantra. However, Ramanuja felt that ‘Nirvana’ should not be limited to a few. He was supposed to sanctify men and women equally.

Ramanujacharya Swamy was the first professor to prove that all are equal before the Almighty. Dalits were looked down upon. Eradicated untouchability and other evils in the society. Swamiji gave everyone the equal fortune to worship God. He called the untouchables “Tirukultar”. It means “divine birth” and they were taken inside the temple. He defended the philosophy underlying many devotional movements as pioneers of the devotional movement. He worked tirelessly for 120 years. Lord Srimannarayana proved to be the ultimate liberation from the bondage of all souls.

Lucknow: Lakmo’s name is Mughal, change it to Lakhanpur or...

‘Save us’ – A crying couple fell at the District...

In the dairy farm, those cows are mentioned in scriptures...