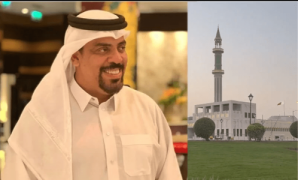 Carter Batista, the influential Brazilian sports personality, recently visited a mosque in Doha and found himself overwhelmed by the feeling of spiritual strength from the call to prayer in the mosque.

FIFA World Cup Visitors to Qatar for Carter Batista shared a clip of the call to prayer on Twitter and described it as the best thing in Doha.

I was standing in front of a mosque when I wrote in the caption Azan Sunny According to Islamic tradition, the call to prayer is repeated 5 times a day to encourage Muslims to pray and pray. This was one of the best things I did here Qatar I watched and it impressed me immensely.

A user wrote that your tweet has spread especially in Gulf countries. You are a wonderful example of tolerance and acceptance of others. Islam It is a religion that needs to be read more and more.

A user wrote We invite you to read more about Islam. Did you know that you are praying there one day?

Carter The video of Azaan was also shared by many social media users.

Vladimir Zelensky declared ‘the best person of the year’ in...

According to the order of the court, some schools of...