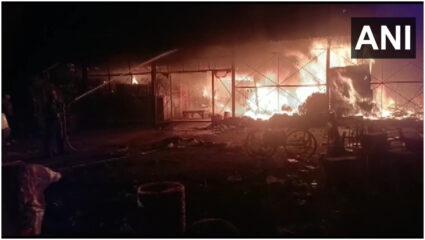 Lucknow: A fire broke out in the Naveen fruit market of Uttar Pradesh’s capital Lucknow last night. Due to which there was a stir in the area. As soon as the information about the incident was received, the team of police and fire brigade reached the spot and after a lot of effort, the fire was controlled. According to the information, there is no information about any loss of life in this arson.

Let us tell you that a fire broke out in the building of the Prints Market of Hazratganj in Lucknow on Thursday. The fire caused panic. After getting the information, three fire brigade vehicles reached the spot. After an hour’s hard work, the team got control. The fire started on the fourth floor of the building. Three children studying in the coaching institute got trapped in the fire on the fourth floor of the building. All of whom were rescued and taken out safely.

Uttar Pradesh | Fire broke out at Navin fruit market in Lucknow, last night. Fire tenders were rushed to the spot and the fire was brought under control. pic.twitter.com/VrXbT5wElP

Surat lawyer and his father arrested for not returning Rs...

Now PAN Card To Be Used As Common Business Identifier ...

Budget 2023: Many big announcements in the budget, know what is cheap and what is expensive Pipa News

Surat lawyer and his father arrested for not returning Rs 66.25 lakh from tax consultant Pipa News