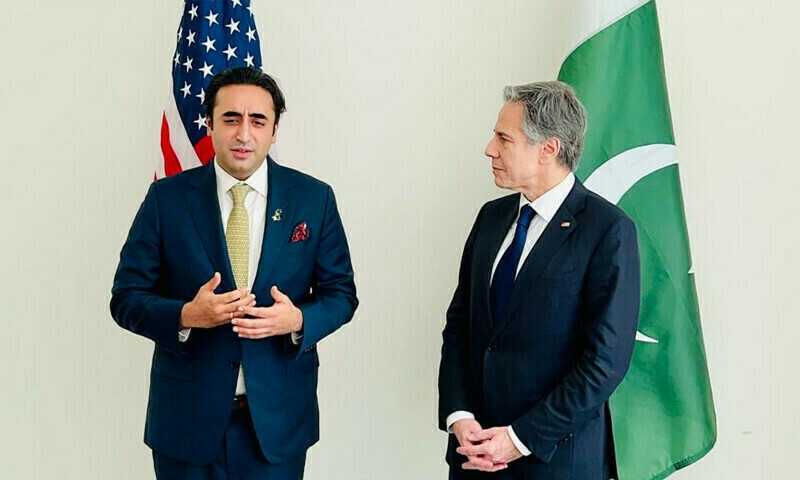 Foreign Minister Bilawal Bhutto Zardari held a meeting with his US counterpart Antony Blinken in New York on Wednesday.

The US Secretary of State and the foreign minister discussed expanding partnerships in climate, investment, trade, and health as well as people-to-people ties.

According to the Pakistani embassy in the United States, the two foreign ministers met at the UN headquarters in New York.

During the meeting, Bliken affirmed a desire for a strong and prosperous bilateral relationship to strengthen economic and trade relations.

In his brief remarks to the media prior to their meeting, Secretary Blinken said that it was an important opportunity for them to talk about the many issues they were working on together.

“We want to focus on the work we’re doing to strengthen economic and trade ties between the United States and Pakistan, of course, focused on regional security,” he remarked.

The US Secretary of State said that the two countries would work together to improve trade relations and create opportunities for Pakistani businessmen.

The Secretary welcomed Pakistan’s Chairmanship of the G77 and committed to advancing climate action and global food security.

“This is our first opportunity to be face to face. We spoke on the phone, we are greatly pleased to be working with the Foreign Minister, with the Government in Pakistan, ”said the Secretary of State.

FM Bilawal said that Pakistan was aware of the recent geopolitical events that had indeed aggravated the situation.

The stock market crashed after the Prime Minister’s statement

Untold Story: Najehal Prabhas for Deepika! It is becoming difficult to finish the shooting Relation between deepika padukone and prabhas is not...

Who wouldn’t call Jethabhai an MLA once, now it is difficult to get even one time food. Gujarat former mla jethabhai rathod live...

Boat with helicopter and submarine to anchor in Isle of Wight

Namakkal: The first female conductor to be appointed to the Government Transport Corporation