Two months ago on July 8, Shinzo Abe was addressing a rally in the slogan of Japan. Around the same time, 41-year-old Tetsuya Yamagami was shot and killed in public. 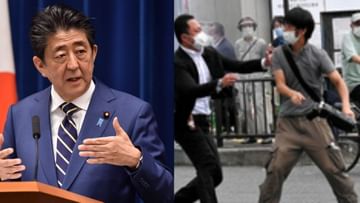 of Japan (JAPAN) of former Prime Minister and PM Narendra Modi (PM Modi) of good friend Shinzo Abe (Shinzo Abe) in murder (Murder) is a big revelation. The reasons behind the killing are emerging from information provided by the Unification Church, which has close ties to Japan’s ruling party. The church has admitted that the mother of the man who killed Shinzo Abe contributed too much and may have been a possible motive for the murder.

Two months ago on July 8, Shinzo Abe was addressing a rally in the slogan of Japan. Around the same time, 41-year-old Tetsuya Yamagami was shot and killed in public. For this he prepared a gun at home. Yamagami confessed that he killed Shinzo Abe because of his association with the Unification Church. This church is also called Mooney’s in Japan. He said his family went bankrupt because of the church. Yamagami’s mother is a longtime member of this church.

Donated so much in two decades

Giving information, the church said that over the past two decades, the mother of the accused has donated 100 million yen (about five and a half crore rupees). Not only this, he also donated his life insurance and land. However, the church says half of the property was returned at the behest of the suspect’s uncle. It is believed that due to this reason his family went into the pit of poverty. Hideyuki Teshigawara, a senior church official, told a press conference that he was “deeply saddened” by what Yamagami told police. Yamagami told police he was angry at the church. Teshigawara is working on reforming the church. It will ensure that no appointments or donations are forced into the church. This should be done without any pressure from followers or family. Shinzo Abe also had close ties to this church. A lawyer for the church said that the donation made by Yamagami’s mother was “excessive” and that we had to take it very seriously so that the family would not suffer.

The government keeps distance from the church

Party surveys in Japan show that more than half of MPs and ministers have church affiliations. Following the assassination of Shinzo Abe, current Prime Minister Fumio Kishida has vowed that his government will end all ties with the church. But the common people of Japan want to know why the political parties are so close to this church.

The church was established in 1954

The Unification Church was first established in 1954 in South Korea. A decade later, it entered Japan. This church was opposed to communism. This church has also been in a lot of controversies. Japanese citizens have often protested this. Read international news here.

Krishi University will emerge as an international level university Pipa...

Typhoid Fever: What to eat when you get typhoid fever?.....

Aim of RSS is to improve India in all fields:...

CM out of Congress President race in Rajasthan Pipa News

Draupadi Murmu: India should be made a World Guru, President...

Typhoid Fever: What to eat when you get typhoid fever?.. What not to eat..? Full details for you.. | What to eat...

Fiona Insurance Pay: What you need to know before making a claim Pipa News

Aim of RSS is to improve India in all fields: Mohan Bhagwat- Dinamani Pipa News