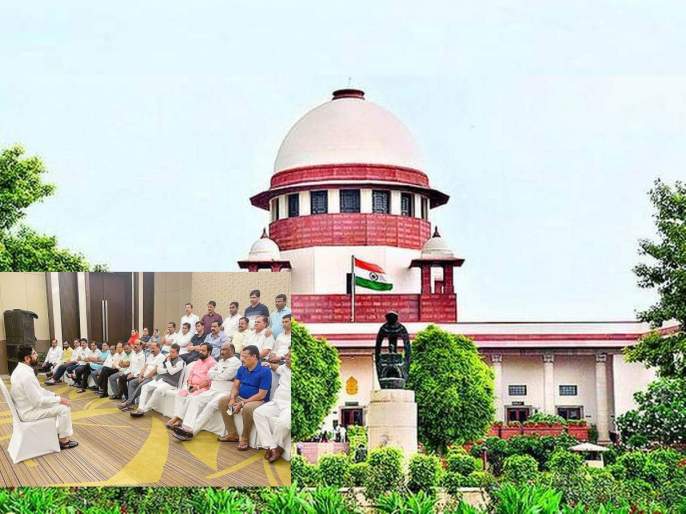 New Delhi : The Supreme Court has extended till July 12 to respond to the disqualification notice issued by Maharashtra Legislative Assembly Deputy Speaker Narhari Jirwal to 16 MLAs from Shiv Sena’s splinter group. Shiv Sena rebel leader Eknath Shinde and his associates rushed to the Supreme Court against the notice. As the next hearing on his petition will be held on July 11, it became clear on Monday that the cloud of political instability in Maharashtra will not dissipate.

Shinde and his associates moved the apex court on Sunday against the disqualification notice issued by Jirwal. Take that petition to the Supreme Court on Monday. J. B. Pardiwala and Justice. The hearing was held before a bench headed by Surya Kant. Renowned lawyer Neeraj Kishan Kaul from Shinde group represented the party, while Adv. Presented by Rajiv Dhawan. Abhishek Manu Singhvi and Devdutt Kamat from Government of Maharashtra argued on behalf of newly appointed Shiv Sena group leader Ajay Chaudhary and Chief Protagonist Sunil Prabhu in the Assembly. Solicitor General Tushar Mehta appeared before the Supreme Court on behalf of the Central Government.

Why not appeal to the High Court?
At the outset of the hearing, question marks were raised over the filing of the petition in the Supreme Court. Why did you come here to the Supreme Court instead of filing a petition in the High Court? This question was asked by the bench to Neeraj Kishan Kaul. Proponents of her case have been working to make the actual transcript of this statement available online.

‘Answer Without Prejudice’
After hearing all the arguments, the bench, while giving an interim decision, has given the rebel MLAs till 5.30 pm on July 12 to respond to the disqualification notice issued by the Assembly vice-president. Earlier, the deadline was Monday, June 27 at 5.30 pm. The court has increased it. He also suggested that rebel members respond without prejudice. Suryakant and Justice. J. B. Pardiwala gave the order.

‘Submit affidavit within five days’
The rebel MLAs argued that the vice-president should not be allowed to execute the disqualification notice until a final decision is taken on the no-confidence motion filed by 34 MLAs against Jirwal. In this regard, the court directed the assembly secretariat to file an affidavit in the next 5 days. Rajiv Dhawan, counsel for the vice-president, clarified that no decision would be taken on the disqualification of the members till July 11.

Restrictions on execution of notices
Rebel MLAs argued that the disqualification notice should not be implemented until a final decision is taken on the no-confidence motion filed by 34 MLAs against the Deputy Speaker of the Legislative Assembly Narhari Jirwal.
– In this regard, the Supreme Court directed the Maharashtra Assembly Secretariat to file an affidavit in the next 5 days.
– Rajiv Dhawan, counsel for the vice-president, clarified that no decision will be taken on the disqualification of the members till July 11.

This is a victory of the Hindutva of Shiv Sena chief Balasaheb Thackeray and the thoughts of Dharmaveer Anand Dighe Saheb. – Eknath Shinde

Question marks present about the letter
The rebels challenged the statutory authority of the vice president. Before giving disqualification notice, 34 MLAs gave no-confidence notice to the vice-president. Neeraj Kishan Kaul questioned whether this gives them the statutory right to issue disqualification notice to the members. Kapil Sibal, counsel for the vice-president, questioned the credibility of the letter sent by the MLAs via e-mail.

Arguments about rights
Rebels’ lawyer Neeraj Kishan Kaul said he could not decide on the disqualification of another member when a no-confidence motion was passed against him. Only the Speaker and the Vice-Chairman who have earned the confidence of the House have the constitutional right to decide on the disqualification of the members, the court said.

The role of the governor is important
Anant Kalse, Former Principal Secretary, Legislature –
The court did not vote in favor of either the motion of no confidence or the motion of no confidence. He further said that if such a proposal is made, then either side can appeal to us. No one has yet asked the governor to prove the government’s vote of confidence. Suppose the MLAs make such a demand, then the next course of events will depend on what the Governor decides on it. The governor can ask the government to prove a majority. Against that, the way is open to appeal to the Supreme Court. The role of the governor is no longer important.

Nothing will happen till July 11
Pvt. Ulhas Bapat, incident expert –
The court’s decision is clear. The disqualification notice is less than 2 days, it should be at least 7 days. At the time of the hearing, the status quo will have to be maintained. This will mean Chief Minister Uddhav Thackeray. They can change ministers. It will not be possible to call a convention till July 11 and bring a no-confidence motion. The separatists will no longer have to respond to the notice within two days due to the court’s decision. Got 14 days time. The convention will be held after the July 11 decision. The governor convenes the convention, but the advice of the chief minister is binding. If the government proves to be in the minority, Thackeray will have to resign. The convention will have to prove that it is in the minority. That is not possible before July 11.

Web Title: at present protection to rebel Shiv Sena MLAs The next hearing on the petition of Shinde and his associates will be held on July 11

Accusations of violence were made by Sask. independent school funding in the spotlight. So how does it work? Pipa News

arjun tendulkar mumbai team, why Sachin’s son who made Mumbai crazy about cricket had to leave the city; Will the decision be a...

Nitish Kumar spoke for the first time on Tejashwi Yadav’s promise of 10 lakh government jobs, know what he said