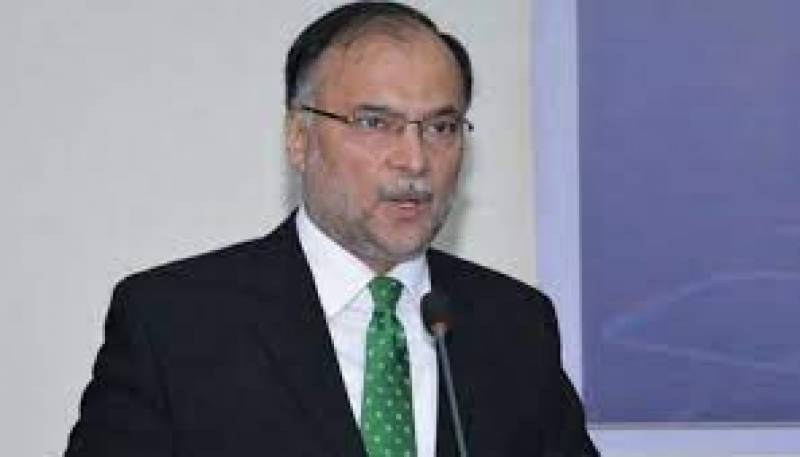 Lahore: Federal Minister for Planning Ahsan Iqbal has said that the story of Imran Khan’s foreign funding has been published in the Financial Times. There is no knowledge of the use of money received from foreign funding. Imran Khan will not be allowed to become Hitler. Imran Khan blessed his followers in the name of prosperity. The Election Commission should give an early decision on foreign funding.

He expressed these views while addressing a press conference in Model Town. Hide foreign funding accounts. Why is the person asking money trail from others afraid to give money trail himself. Imran Khan received huge amount of money from India and Israel. The amount received from the British government was not of Imran Khan but of the people. Imran Khan took funding from these external powers. Those who want to weaken Pakistan.

He said that Imran Khan defrauded the nation of billions of rupees in the name of dam. Crores of rupees were taken from overseas in the name of dam. Countless overseas Pakistanis have asked where their donations are. Why was the dam not built with their hard earned money? Imran Khan did hair tampering, fund tampering and political tampering. He tampered with the election results of 2018, the consequences of which the people are still suffering, PTI wants to weaken the country by making negative propaganda about the economy. Imran Khan created a bubble economy and gave an amnesty scheme to black money earners during his four-year tenure. By creating artificial prosperity in Pakistan, he opened the import gate, gave permits to import vehicles to reward his friends.

He said that the genie of inflation was taken out of the bottle by Imran Khan, the imbalance between dollar and rupee came because of Imran Khan’s negative politics. In the last three months of the PTI tenure, the finance ministry refused to release the final tranche for development. God willing, in a few months, the economy will be stabilized and we will go to the elections. We took the burden of Imran Khan’s sins, put our political reputation at stake and decided to save the state and the economy. We could have won more seats in the by-elections but the public reacted because of our tough decisions a few months before the election. We sacrificed to save our political reputation.

The federal minister said that Imran Khan wants to put the country in a situation like Sri Lanka. We staked our politics to save the country. Pakistan cannot become Sri Lanka because there is a patriotic government in the country. Due to Imran’s wrong policies and IMF agreement, there is inflation in the country today. Due to his wrong economic decisions, Imran Khan has loosened the nut bolts of the Pakistani economy while we are tightening the nut bolts of the economy again. In the next four to six months, the country’s economy will stabilize. After receiving the IMF installment, the value of rupee will stabilize. Those who earn profit by buying dollars will come to their senses, the country needs stability not Imran Khan’s chaos.

The Federal Minister said that there is an impression that the Election Commission is afraid of Imran Khan’s threats, due to which it is not giving the decision on the foreign funding case yet, we demand that the decision on the foreign funding case should be pronounced soon. The general elections will be held on the fixed period according to the constitution and not on anyone’s wish. They want to conduct the general elections on the basis of census, Imran Khan is Mr. Clean and not Mr. Corruption, I am going to file a case against him for making false and baseless allegations of corruption. The federal minister said that Imran Khan has created a political spectacle in the country. Due to which there is a situation of instability and uncertainty and the nation is seeing all this.

In response to a question, he said that in Punjab, Hamza Shahbaz had to make big fuss to take oath, while Parvez Elahi takes oath overnight, the difference is obvious. PTI is propagandizing against me on social media that in December 1996, Bill Gates proposed to build a software university in Pakistan, which I did not approve. In 1996, Nawaz Sharif was the leader of the opposition and I was the MNA of the opposition. He said to Imran Khan that there is a limit to lies, teach history to those doing propaganda on social media.