‘KCR has stumbled on the construction of Hyderabad Metro. They are constantly trying to hide their failures,’ said Kishan Reddy. 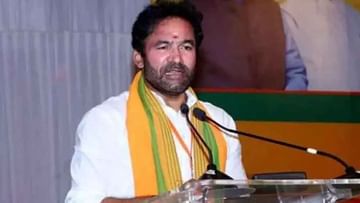 ‘KCR has stumbled on the construction of Hyderabad Metro. We are not surprised by his move to lay the foundation stone for another new metro line. They are constantly trying to hide their failures,’ said Kishan Reddy.

Farm House Chief Minister, who is preparing to lay the foundation stone of Hyderabad Airport Metro, it would be good to recall his previous warnings that even if he runs away with blood, the construction of the metro will not be undertaken, and no one will be allowed to turn a single yard!!#HyderabadMetro#FarmHouseCM pic.twitter.com/wD4eR9NEID

‘The Chief Minister unilaterally changed the approved plan. Due to this the project cost increased by ₹ 3,500 crore. The completion of the project was also delayed. Earlier it was estimated that the project should be completed and implemented by 2016. Telangana government is trying to divert people’s attention by announcing new projects before completing the ongoing projects. He objected that the government which could not complete the metro rail project and failed to provide the state’s share capital for the Hyderabad MMTS project is announcing a new plan.

“There was an agreement between the South Central Railway and the Telangana Government regarding the work of MMTS Phase 2. An amount of ₹ 832 crore has been spent on this project so far. The state government was to contribute two-thirds of the total cost of the work. But due to the failure of the state government to provide this money, the implementation of the work was delayed. Due to this, the cost of the work has also increased to an extreme extent,’ explained Kishan Reddy.

People thanked the central government for the change in income...

Uber gave a job, worked for a few months and...

Uber gave a job, worked for a few months and paid 1 crore; This was revealed – Marathi News | gurugram former...