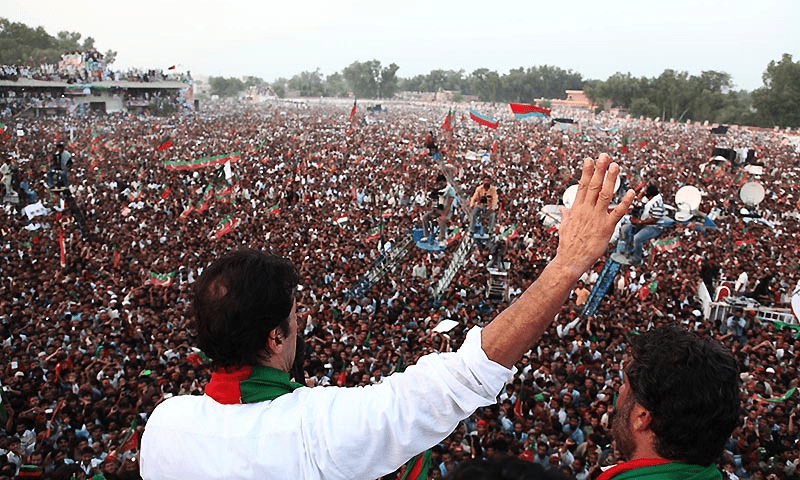 Pakistan Tehreek-e-Insaf (PTI) on Friday got conditional permission to hold a demonstration in Faizabad, Rawalpindi on 26 November.

According to a notification issued by Deputy Commissioner (DC) Rawalpindi, the protesters cannot raise any anti-state slogans or make speeches that are against “constitutional offices, armed forces and judiciary”.

The notification warned that in case of any violation of the guidelines, the party and the organizers may face legal action.

The notice also said that Faizabad be vacated on the night of 26 November as the England team is reaching Rawalpindi on 27 November for the Test series against Pakistan.

People will enter Rawalpindi from all sides on November 26: Asad Umar

Rawalpindi Police has been instructed to take all necessary security measures for the dharna.

The document states that PTI chairman Imran Khan and the administration should use the prescribed route as decided by law enforcement agencies and that “Khan will not use a sunroof car before and after the gathering.”

Reacting to the notification, PTI leader Asad Umar said there was no doubt that Imran’s life was in danger and the DC refused to allow him to land the helicopter at a safe place.

“Instead, the administration wants the former PM to land in dangerous territory,” he told the media on Friday.

Umar told DC Rawalpindi, “The orders are coming from elsewhere but your signature is on the document.” If anything happens to Imran, you will be held responsible for it.

Earlier, Omar had said that a tent city would be set up at Allama Iqbal Park to accommodate the protesters. In response to this, the DC said that the park will not be used by any employee for the purpose of overnight stay.

“The administration of the protest will be responsible for any loss of life,” the notification said. It also refused to allow the use of drone cameras.

The DC has asked PTI to video record the entire episode and share its unedited version with the police.

On 19 November, Imran, who was recovering from bullet wounds sustained in an assassination attempt at the Long March earlier this month, called on party supporters to gather in Rawalpindi on 26 November.

He said he would also join the protest, where he would “announce the next course of action”. He urged PTI supporters to reach between 1-2 pm.

He said, ‘This protest will not stop. “All experts agree that there is no way out of the political crisis except holding free and fair elections. So we will demand only one thing in Islamabad.

K-pop chosen by billionaire to travel to the Moon with...

Badruddin Ajmal Ajmal is the Congress leader expelled from the party for kissing it! Banned for 6 years – News18 Assam Pipa...