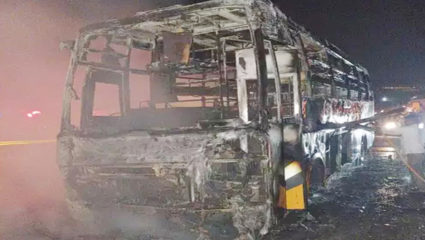 Nashik: A fire broke out in a private luxury bus going from Nashik to Kolhapur on Friday night. The incident took place in Mohadri Valley. As soon as the incident came to light, the bus driver put the bus on the side of the road and let the passengers down, due to which there was no loss of life. Sinnar MIDC Police has registered a case and started investigation.

According to information received from the police, the driver of the private luxury bus named Shrihari Kulkarni was carrying 30 to 35 passengers from Nashik towards Kolhapur. The bus originating from Nashik had reached Mohadri Valley on Friday night. During this the bus caught fire.

Soon after, the driver Kulkarni put the bus on the side of the road and let the passengers down. After this, the police and fire department were informed about the incident. The staff of Sinnar MIDC Police Station and the secession of Sinnar Municipal Council and MIDC Fire Department reached the spot. After this the fire was controlled, but by then the bus had burnt down.

RCB wins in style against LSG in play off

Google’s Pixel Watch is coming to the market this year

Sheikh Rashid slapped an elderly man while addressing the workers

Stress: Learn about these asanas that relieve mental stress | Try These Yoga Asanas If You Are Suffering From Stress

What is the new responsibility of Soumitra Khan to prevent the change of party? – Uttarbanga Sambad