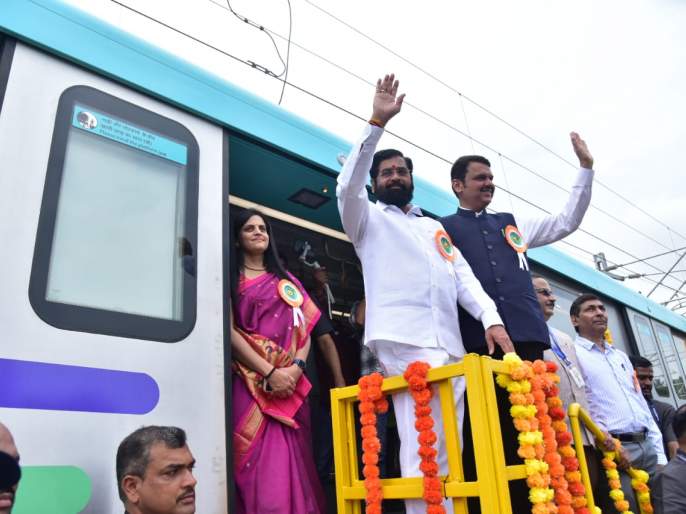 Mumbai: The trial run of Mumbai Metro-3 was finally completed at Sariputnagar in Aarey as the Shiv Sena and BJP clash over Aarey car shed. The trial run of Metro-3 was flagged off in the presence of Chief Minister Eknath Shinde and Deputy Chief Minister Devendra Fadnavis. After this, while congratulating the Shinde-Fadnavis government, the BJP leaders have criticized the Thackeray government of the previous Mahavikas Aghadi.

All political pollution is gone

Vighnahartya Ganaraya is coming. But even before Bappa came, the big obstacle facing Mumbaikars has been removed. Now there will be no disruption in the work of Metro-3. It is the government that takes positive decisions regarding infrastructure keeping in mind the benefit of the common people. Metro-3 is going to be the new lifeline of Mumbaikars. Hence, a government has come which takes decisions for the benefit of the people. It was argued that this metro will cause environmental degradation. But now all the political pollution is gone, Eknath Shinde took a dig at former Environment Minister Aditya Thackeray.

Meanwhile, protecting the environment is everyone’s responsibility and everyone cares about it. Not that only certain people care. Now when I came to this place, I saw that there are roads on three sides. The manner in which environmental degradation has been claimed has not happened and even the Supreme Court of the country gives judgments in the interest of the citizens of the country. Metro-3 will benefit Mumbaikars a lot. Women, senior citizens travel with difficulty in local trains. Also, tired of the crowd, people decided to buy their own vehicles. But we need to strengthen public transport in the state. So that people don’t have to take their vehicles out.

Governor of Tamil Nadu who was pleased to see Vadapalani...

In Surat, the husband and wife were playing Garba at...

funny incident: A child who says she will become old...

Stone pelting in Garba, police beat up the accused by...

Arshdeep Singh, IND vs SA 3rd T20 | Was another player injured? This player did not play in the last T20 match...

Terrible accident on Bandra-Worli sea link, three vehicles collided with the ambulance that came to take the injured, five died | Collision between...

funny incident: A child who says she will become old if she always studies 🥰😂..(Video) | A little boy who says that if...