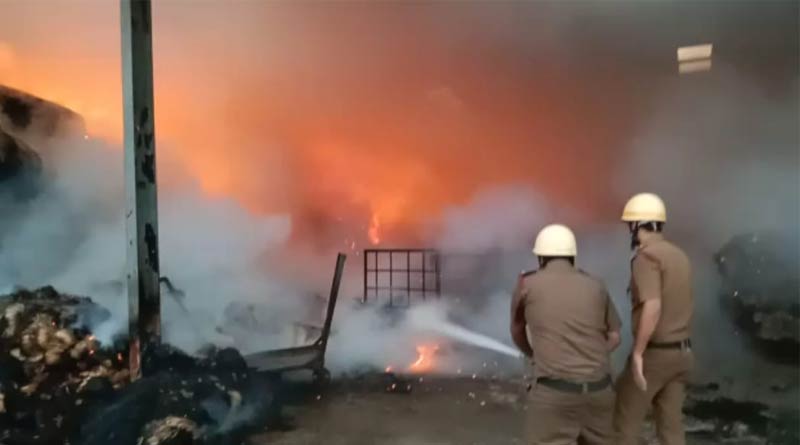 Surjeet Dev, Diamond Harbour: A terrible fire broke out at the Elda Road of Ward No. 3 of the Bajbaj Municipality. By 4:30 pm on Monday, the mill square was covered with black smoke. 10 fire engines went to the spot to bring the situation under control. Even after a long time, the fire is still not under control.

According to labor sources, there were no workers inside the jute mill on Monday afternoon. However, the work of clearing the goods was going on outside. Suddenly they saw flames inside the mill. In a moment black smoke covered the surroundings. Many people from the surrounding areas appeared in front of the jute mill due to the shouts of the workers. The police and fire department were notified. The workers themselves first tried to put out the fire. But it did not help. The fire took a terrible shape due to the storage of flammable materials.

Eight fire engines reached the spot and started dousing the fire. Later two more engines went to the spot. The fire was brought under control by 6:30 in the evening, but the fire is still not completely under control. Firefighters’ initial guess is that the fire was caused by a short circuit. South 24 Parganas Fire Extinguisher T. K. Dutt said that efforts are being made to completely extinguish the fire with the help of ten engines and two pumps.

He said that there was no casualty in the fire incident. However, due to the weather, the occurrence of fire in the jute mill is very normal. It is known that the jute mill was supposed to have a fire extinguishing system according to the law, but it did not work. As a result, the fire spread quickly. It is reported that the fire brigade will demand accountability from the jute mill authorities.

Ranji Trophy: Virat failed, Mukesh-Akash all out Bengal for 173...

Bengaluru Three-year-old girl raped and murdered by 22-year-old man in...

CM’s word Visakha is to insult the Supreme.. MP GVL ...

Crime filed against 239 ministers in the country, rape, murder,...

Ahmedabad : Team India practiced at Narendra Modi Cricket Stadium, the final match of the series will be played tomorrow – ind vs nz...