Bomb Threat: According to the police, the CCTV footage of the area around the shop was checked after receiving the letter. About 200 CCTV footages were examined and the accused was identified. 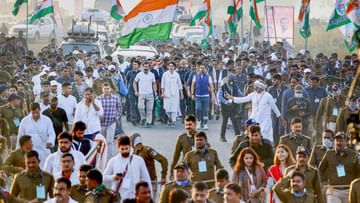 Rahul Gandhi’s security has been increased after the threat. Photo: PTI

Indore: If you set foot in the city, you will be killed. Congress leader Rahul Gandhi was threatened with such murder by an unidentified person. The police filed a case after recovering the letter from outside the sweet shop. The investigation started. As soon as Bharat Joro Yatra entered Madhya Pradesh, the accused was caught in the police net. According to the police, a person has been arrested from Nagda in Madhya Pradesh for threatening to kill Rahul Gandhi. Indore Crime Branch has also been informed about this.

Ujjain District Nagdar Superintendent of Police Satyendra Kumar Shukla said that a picture was sent by the Indore Crime Branch. It was reported that the suspect may have threatened to kill Rahul Gandhi. Based on that source, the police started a search operation in the area. The suspect was spotted near Nagda Bypass on Thursday. The police reached the spot on receiving the information and arrested the accused.

According to police sources, an Aadhaar card has been recovered from the accused. According to that Aadhaar card, the name of the accused is Narendra Singh. His home is in Rae Bareli, Uttar Pradesh. The accused has been handed over to the Indore police. It has been informed that the investigation of the entire incident will be done by the Indore police. It is known that the arrested person had threatened to kill several people through air mail.

It is learned that the accused had threatened to kill Rahul Gandhi. The threatening letter was recovered from in front of a sweet shop in Juni police station area of ​​Indore. In that letter, the accused wrote that Rahul Gandhi will be bombed when Bharat Joro Yatra reaches Indore. After receiving this threatening letter, Rahul Gandhi’s security was increased. A complaint under Section 507 of the Indian Penal Code was filed against the unidentified person.

According to the police, the CCTV footage of the area around the shop was checked after receiving the letter. About 200 CCTV footages were examined and the accused was identified. After that the picture of this person was sent to all police stations in Madhya Pradesh.

Mandus storm echoes: Visitors are not allowed to visit the...

Dewayat Khawad, a folk writer of Saurashtra, has been booked...