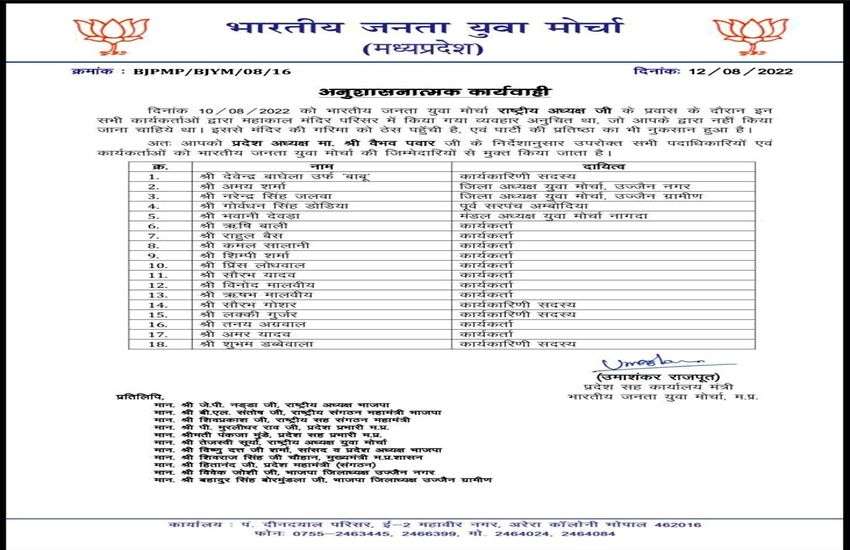 The dignity of the temple was hurt
In the order issued by the State Co-Office Minister Umashankar Rajput, it has been said that the behavior done in Mahakal during the stay of the national president in Ujjain was inappropriate which should not have been done by you. Due to this act the dignity of the temple has been hurt and the reputation of the party has also been damaged. On the action of the organization, Nagar President Amay Sharma says that he was not there at the time of the incident. This incident happened due to the mistake of Mahakal temple employee. I have also spoken to the organization in this regard. Let us inform that the Morcha had issued a notice to the workers on Thursday itself after this incident. On Friday, action was taken to relieve him of liability. It is noteworthy that in the developments during the Mahakal Darshan of the National President, on the complaint of the temple administration, the Mahakal police had registered a case against unknown people including two workers.

Everyone is affected by caste in one way or another...

Rajnath Singh said PoK should have been decided – Rajnath...

Employment notice issued for SLST candidates, as a result of...

Navjot Singh Sidhu, imprisoned in the Central Jail of Patiala,...

A suspicious boat was found in the sea of ​​uran...

Krishi University will emerge as an international level university Pipa...

Typhoid Fever: What to eat when you get typhoid fever?.....

Employment notice issued for SLST candidates, as a result of their long time agitation Pipa News

Navjot Singh Sidhu, imprisoned in the Central Jail of Patiala, decided to observe a silent fast during the protests Pipa News

A suspicious boat was found in the sea of ​​uran in raigad district. Pipa News