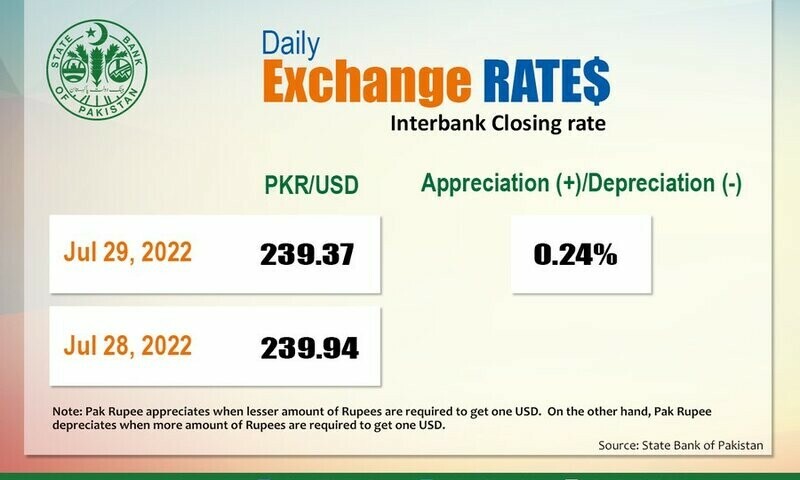 The rupee’s 10-session depreciation run finally came to a halt as the local currency registered a marginal correction against the US dollar at the inter-bank on Friday. The rupee, however, remained at the level of 239.

The rupee on Thursday closed at 239.94, down 3.92 or 1.63% on a day-to-day basis, amid pressure on import payments and the government’s inability to intervene.

Rising political and economic tensions have kept the rupee strong against the US dollar. Despite Friday’s gains, the local currency has lost over 13% in the past 11 trading sessions.

“Political tensions escalated again in Punjab following a change in the political structure, deepening uncertainty and impacting the overall economic scenario of the country,” Trust Securities and Brokerage Ltd said in a note on Friday.

“This will hurt equity and forex markets, impacting the rupee, which is already facing a free-fall scenario, eroding market confidence,” Trust Securities and Brokerage Ltd said.

In addition, the State Bank of Pakistan’s reserves declined by $754 million to $8.575 billion.

In a video message, Zafar Paracha, general secretary of the Exchange Companies Association of Pakistan (ECAP), said, “Being an import-oriented country, the increase in the dollar rate adds to our difficulties, while also increasing the country’s external debt.”

“Also, our expenses are more than our income. However, the government is unwilling to cut down on its expenditure, adding to the pressure on the national exchequer,” he said.

Paracha pointed out that the USD is being sold at the Rs 250 level in the “black market”, while the authorities have taken a lax attitude in this regard.

The story was originally published in Business Recorder on July 29, 2022.

Black officials file a discrimination complaint against the federal government...

Gas prices will increase by 5 cents on Thursday in...

Violent connection is the reason for the ban; The central government clarified the PFI ban Pipa News