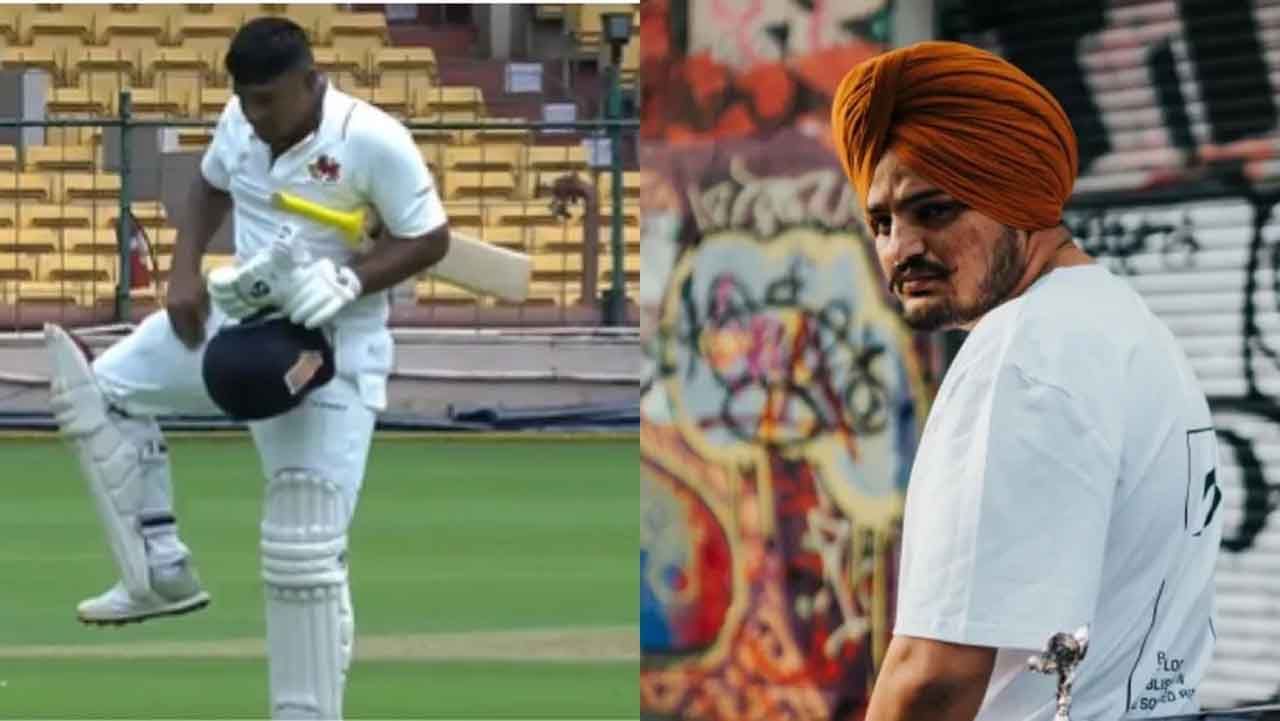 Ranji Trophy 2022: The crowd in the gallery applauded the innings. Sarfaraz Khan burst into tears after the innings and finally paid homage to the Punjabi singer by wiping Sidhu Musevala’s signature style.

Punjabi singer-rapper Sidhu Moosewala, who passed away a few days ago, had a fan following. People loved their songs more and were very impressed with their personality. But they are not in this world now. Lots of fans who have lost him are paying tribute to him in his own way. Recently, Ranji Cricketer Sarfaraz Khan, who scored a century in the Ranji Trophy, paid tribute to Sidhu Musewala in the center of the stadium. No one had ever given him such emotional earnestness. Sarfaraz, who performed superbly in the final, paid tribute to Sidhu in his own style.

Sarfaraz Khan is performing at the Ranji Trophy and the selectors should not overlook him. In the Ranji Trophy final on Thursday, Sarfaraz Khan scored his fourth century in the 8th inning. Sarfaraz’s innings of 243 balls comprised of 13 boundaries and two sixes with a strike rate of 55. This helped Mumbai score a total of 374 in the first innings. Sarfaraz Khan, meanwhile, was struck with a century. Immediately the helmet was lifted and the bat flew into the sky. The crowd in the gallery cheered the innings. Sarfaraz Khan burst into tears after the innings and finally paid homage to the Punjabi singer by wiping Sidhu Musevala’s signature style.

The Celebration from Sarfaraz Khan is an absolute pleasure watch. pic.twitter.com/QamNJ5Ua7g

On May 29, on his way to his village, Mansa, he was shot and killed by some unknown perpetrator. Lawrence Bishnoi is responsible for the gang’s assassination. Many have been arrested so far in this case. His family has not been able to recover from the tragedy. People pay tribute to them in their own way. Shraddhanjali was also present at the Times Square building in the US a few days ago, playing Musevala’s songs. A large number of fans had gathered there. In addition, Diljit Dosanj sang a song for him by Sidhu Musewala at a concert in Vancouver and paid tribute to him.


Right-arm batsman Sarfaraz Khan scored 275 against Saurashtra, 153 in the quarter-final against Uttarakhand and 165 against Odisha. At the same time, Sarfaraz Khan surpassed his run tally in the 2019/20 Ranji Trophy season, scoring 928 runs in 9 innings, including a career-best 301 runs.

A tiger harassing officers in Kakinada

Maharashtra Fire Breaks Out At Tarapur Midc Plant In Palghar

The rarest picture! This is exactly what happens when the Sun and Venus face each other, never to be seen again in 100...

CoronaVirus Live Updates: Anxiety has increased! A new variant of the Corona is spreading in Mumbai; Attacks on people over 50 –...

Gst Council : Today Will Be The Decision On Casinos And Online Games, States Said Give Gst Compensation For Five More Years To Compensate...

On Udaipur murder, Rahul said – cruelty in the name of religion is not tolerated, Priyanka’s tweet – the culprits should get strict punishment

Old woman commits suicide by jumping into a well in Haridevpur