SURAT: Based on a tip-off received by the city crime branch police, Naradham Easam Mukesh Panchal has been arrested for raping a 7-year-old girl and killing her. 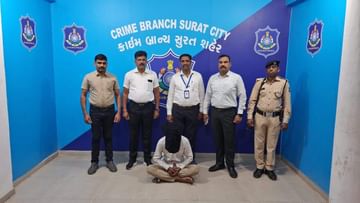 Accused of kidnapping, rape and murder case arrested in Surat

Naradham, who killed a 7-year-old girl after raping her in the Chowk Bazar Police Station area of ​​Surat, has been nabbed by the Surat Crime Branch police within hours of registering the crime. Importantly, a total of 14 crimes have been registered against the accused in different police stations.

In Surat on December 7, a case was registered regarding the abduction of a 7-year-old girl in Chowk Bazar police station area. When the incident was being investigated by the police, during the investigation, the body of the girl was found in a society house in Wade Road area. In this matter, the police immediately investigated the entire matter and found that a 7-year-old girl was first raped and killed. Therefore, the police registered a case in the whole matter and attempted to arrest Naradham, who raped and killed the girl child. At that time, Surat Crime Branch Police was also involved in the investigation of Chowk Bazar Police.

On the basis of information received by the Surat City Crime Branch Police, Naradham Easam Mukesh Panchal, who raped a 7-year-old girl and killed her, has been arrested. Mukesh Panchal lives in a house next to the girl’s house in a society on Issam Wade Road. The accused was nabbed by Surat Crime Branch Police from Wade Road Ataljinagar Industries. On questioning the accused, Mukesh Panchal confessed that he had kidnapped a 7-year-old girl living next door on December 7 at 11:30 pm. Then he took the girl home with him on the pretext of giving money. Then he raped the girl and killed her and hid the body of the girl in a small bed in his house and ran away after locking the house.

Surat Crime Branch Police have arrested the accused Mukesh Panchal and are trying to hand him over to the Chowk Bazar Police. The police investigation has revealed that as many as 14 cases of vehicle theft have been registered against the accused Mukesh Panchal in Surat’s Katargam, Salabatpura, Athwa, Umra, Mahidharpura and Chowk Bazar police stations.

12 terrorists killed in Pakistan military operation and Biden in...

Karunanidhi’s pen symbol in Marina.. Petition in Supreme Court to...

Trans couple in Kerala gives birth to baby, refuses to...

A program organized in Pathankot to connect the youth with...

Home loans, car loans will be expensive; A half...

After 25 years, Raveena Tandon spoke openly about her breakup with Akshay Pipa News

Home loans, car loans will be expensive; A half percent increase in interest rates Pipa News