Snakes often go to Shiva temples.. We have been watching videos of darshan through social media.. Recently, a huge cobra appeared in a temple. This incident took place in Kamareddy district of Telangana. 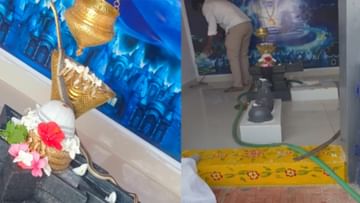 Snake On The Shiva Lingam

Hindus are a culture that believes and measures nature as divine. Hindu orthodoxy says that the entire universe is filled with divine forces. Not only in man.. cattle birds, animals,. We have the nature to see God in all living things like snakes. Many animals and birds like dog, cow, cobra, crow are worshiped as gods. Snakes have a special place in Hinduism. Nagaloka is one of the seven worlds.. Vasuki, a serpent, was formed into a rope when the cow’s milk was squeezed for amrita.. There are various stories about snakes such as Kanthabharan cobra around Shivayya’s neck, Lord Vishnu’s Panpu Adisesha and other snakes. A snake performed Bholashankar’s puja in Srikalahasti Kshetra.. But often snakes go to Shiva temples.. We keep seeing the videos of darshan through social media.. Recently a huge cobra appeared in a temple. This incident took place in Kamareddy district of Telangana.

Subrahmanya Swamy temple is located in Domakonda suburb of Kamareddy district. There are many upalayams along with Lord Shiva’s son Subrahmanya Swamy. Lord Shiva also receives worship with devotees. In this background, recently a cobra appeared in the sanctum sanctorum of the Shiva temple. The snake wrapped around the lingam for a while.. Then the cobra circled around the lingam for about an hour. Due to this, a large number of devotees reached the temple to visit Lord Shiva to see this phenomenon. The temple area was mesmerized by the remembrance of Shiva’s name. Later, the snake was taken into a plastic box and left safely in a dense area nearby.

Check out the latest news highlights