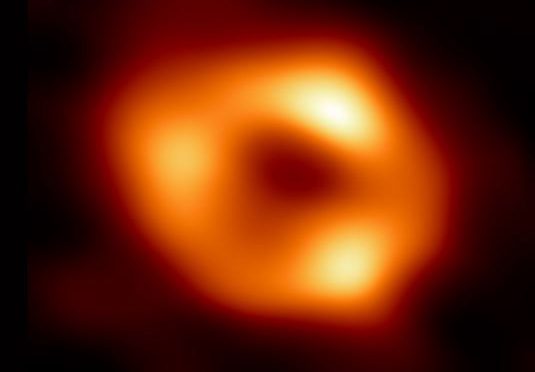 London: (Web Desk) For the first time, scientists have released a clear picture of a black hole in the center of our Milky Way galaxy, thus this is the second important picture of the black hole.
The image was released by a collection of Event Horizon Telescopes (EHTs) located in eight locations around the world that work together like a giant telescope.
In 2017, ETH drew scientists’ attention to two black holes, one of which was observed near the cluster arc or Sagittarius of the Milky Way galaxy and was named Sgr A *. The second black hole was observed in the M87 galaxy, which has been given the scientific name of M87 *.
“We got what we wanted, and that’s the picture that shows what a black hole looks like,” said Zaire Younesi, a scientist with EHT.
It should be noted that the black hole does not emit any light but the shadow of the black hole is visible in front of a bright background in the picture. The background light is of a hot copper plasma which Sagittarius A * is pulling towards itself and the matter is dispersing.
This process of black hole formation in our galaxy is much faster than in the M87, which is why it took so long to form this image. M87 * is also the largest black hole in the known universe, about six and a half billion times the size of our Sun and 1,000 times larger than Sagittarius A.
It takes a few days to a few weeks for the plasma to orbit the M87 *, whereas in the Sgr A * a hot plasma cycle takes about a minute to complete.
This means that the light and patterns of gases around Sgr A * change very rapidly. In the observation, it also looked like a fast-moving dog that chases its own tail in a circle, said Chai Quan Chen, a scientist at the University of Arizona.
Another problem was that the Earth was located on the edge of the Milky Way galaxy, and so we were confronted with all the star lights, dust, and bodies between the Sgr A * black hole and the Earth itself. That is why the help of supercomputer was taken for the final imaging which helped in data processing. Radio images were collected and studied for several nights.
Zaire Younesi said that it was very difficult to make a picture of Sgr A * and all the scientists played their full role in it.
When the final image came out, it was the same as the image of the 2019 M87 *, despite differences in size and shape. These two black holes are very different from each other in terms of mass, galactic structure, and so on, but when viewed closely, they look very similar. Similarly, Einstein’s theory of general relativity is also prominent here.
The circle of light in the image proves Einstein’s theory of relativity because the gravitational force of the black hole in the Milky Way is so great that the light waves coming from behind are bent. But the spinning plasma looks a little brighter, while the light at the back of the black hole is spinning.
On this occasion, Dr. Younes said that after many decades, Einstein’s prediction and theory has proved to be correct.

What should be the solution to the crisis?

Amit Shah, Article 370: “People who say that blood will flow will not be able to throw even a simple stone”; Statement of...

Another Rs 500 crore per month with hike in liquor rates

The blasphemy of Socrates’ wife was well-known throughout Athens