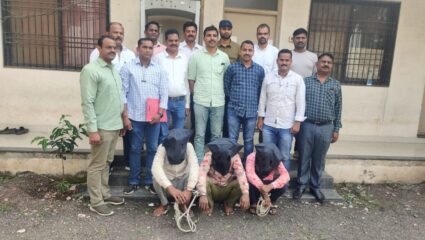 Aurangabad : The gang of the Inter-State Gang, who entered the Pagaria Auto Showroom located on the city’s Court Road, late last month with the intention of committing theft, managed to escape by stealing the safe kept in the showroom. Had it. Since the incident came to light, the Crime Branch Police of the city was engaged in investigation day and night. The Crime Branch police has succeeded in exposing this theft after about one and a half months. The police have succeeded in arresting 8 members of this inter-state gang, which has been involved in thefts at several places in Maharashtra and Gujarat. Police also seized an amount of one lakh stolen from the safes of Pagaria Auto and two bikes used in the theft from the gang members.

Crime Branch PI Avinash Aghav of the City Police Commissionerate said that on the night of August 4, 2022, unidentified thieves had entered and stole the safe kept in the showroom from behind the Pagaria auto showroom located on Court Road in the city. The thieves kept walking by keeping the stolen safe on two bikes. This safe was found the next morning lying vacant under the flying bridge of Golwadi Shivar, adjacent to the city. The crime branch and Kranti Chowk police took this incident very seriously and started investigation.

The thieves were arrested from Jalgaon district. In the investigation, the police could not get any clue about the thieves. Despite this, the team of Crime Branch PSI Ajit Dagdkhair and Amol Maske, after investigating the incident closely, laid a trap in Survada village of Jalgaon district on 20 September, on the information received through news, the police had received information that there was a price in this village. The laboring accused carried out the theft in Pagaria Auto.

Thieves confess to stealing the safe

The police first started interrogation by taking Shiva Nagulal Mohite, Sonu Nagulal Mohite, Ajay Sitaram Chavan, the head of the team, residents of Survada village in Jalgaon district. During interrogation, these thieves confessed to stealing the safe by stealing from the Pagaria auto showroom. After further questioning by the police, the police got information about the involvement of other accused in this incident as well. Police arrested other gang members Jitu Mangal Singh Beldar, Badal Hiralal Jadhav, Abhishek Devram Mohite, Vishal Bhaulal Jadhav, Karan Gardedar Beldar all residents of Jalgaon district on information received from the gang heads. All these accused confessed to sharing the money received from the safe of Pagaria Auto among themselves.