TV9 Special: Know Juvenile Driving Rules or else parents will spend nights in jail because of children!

For the happiness of children, do not give the keys of the motor-cycle / car in their hands before the driving license is issued. Because at the time of the accident, not the children, the parents and the vehicle owner will be trapped. To the extent that the arrest will reach to jail, fine. Also, the claim of insurance claim will be rejected, so differently. 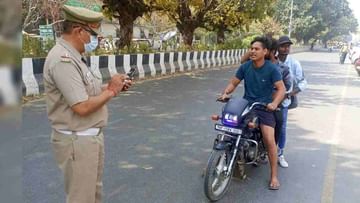 The provision of fine up to 25 thousand rupees for violation of driving rules is present in the transport law.

As soon as the child in the house looks healthy i.e. tall and wide from the body. In the same way, at first, it is the parents who feel tempted that if their son and daughter driving It would be great if you start! As soon as the children learn to ride a car and a bike, a lot of trouble for parents will be reduced. From the driving point of view, the child also becomes happy to see himself standing on his own feet. If anything is left unturned, then in this case the children themselves stick to their insistence and complete it. So that, they can get the pleasure of driving as soon as possible. So that they can also establish their own status by driving a car-motorcycle. We are introducing you to the legal aspects behind it. Because because of all this thinking, you are feasting on big trouble while sitting at home. Children will get hurt and they will eat, even parents may go to jail. After all how? It is important to know.

Actually, all this is the same truth, which we are seeing in every house in today’s society. Leaving the boundaries of childhood and moving towards adulthood, children have a lot of urge to learn driving. The driving force behind the wheel is completely ignorant of the rules and regulations. What about children, in many cases even parents are not aware of juvenile driving laws. Traffic laws and juvenile driving rules come in the understanding of all this, when you get stuck or get hurt. TV9 Bharatvarsh is trying that why should such an untoward happen.

You already understand that what is the driving law of children in India? If you fail to follow them, your parents may have to go to jail. All this is not to scare, but to be careful and alert before stumbling. According to Hanumat Singh, who has worked as ACP Traffic (Assistant Commissioner of Police Traffic) in Delhi Traffic Police for a long time, “Any vehicle, whether a motor cycle or a car, is in the hands of the children until the age of 18 is completed. You should not give.

It is a legal offense to do so and for this, not the children, their parents are directly made accused (accused) of violating the law. Meaning, if a novice child causes injury to someone while driving a vehicle without a driving license, then the child will not be directly entitled to punishment for that the parent, or in whose name the vehicle is registered, will be the same.

Meaning the parents or the vehicle owner cannot escape legal responsibility at the time of an accident by saying that the child was sorry. So as soon as the child completes 18 years of age. First of all apply for his learning driving license. After that within 6 months when he passes the driving test at the licensing office. Then his permanent driving license will be made.

For the first time (if the applicant’s age is 18 years or above at the time of making the license) Permanent Driving License (Car-Motor Cycle) is currently made for 20 years. Since at the time of the accident, the minor driver does not have as much responsibility as the parents or the owner of the vehicle. Therefore, it is important not to give the keys of the vehicle to the children. This will save the child from getting hurt himself. The risk of possible accident caused by his vehicle will be avoided.

According to a former Motor Licensing Officer (MLO) of the Delhi Transport Department, if an accident happens to a minor, then the insurance company also does not accept your claim in that case. On the other hand, senior advocate of Delhi High Court and retired DCP of Delhi Police Ravi Shankar Kaushik says that if a minor is caught while driving, even if there is no accident with him. Even then, if caught, every legal responsibility will be of the parents or the owner of the vehicle.


In such a case, the provision of fine up to 25 thousand rupees is present in the Transport Act. Also, when the matter reaches the court, the court can sentence the guilty parents or the vehicle owner (whichever is two) to three years’ imprisonment. Therefore, in such a situation, it is very important for those parents or vehicle owners to be alert, who, on demand of children, immediately hand over the keys of their two wheeler or car to keep their mind ‘big’. This negligence may not at once be as heavy on the child as it would on the parents or the owner of the vehicle.

Extension of holiday for matriculation schools till 9th ​​October: Matriculation...

Kheda: Stone pelters during garba tied to pillar and beaten...

Ravana is worshiped on the occasion of Dussehra Payal Ch...

Three Muslim houses were razed in a Madhya Pradesh village...

Hyderabad: Have you ever noticed the roofs of metro stations...

Hyderabad: Have you ever noticed the roofs of metro stations in Hyderabad.. What happens when a metro train brakes.. Pipa News