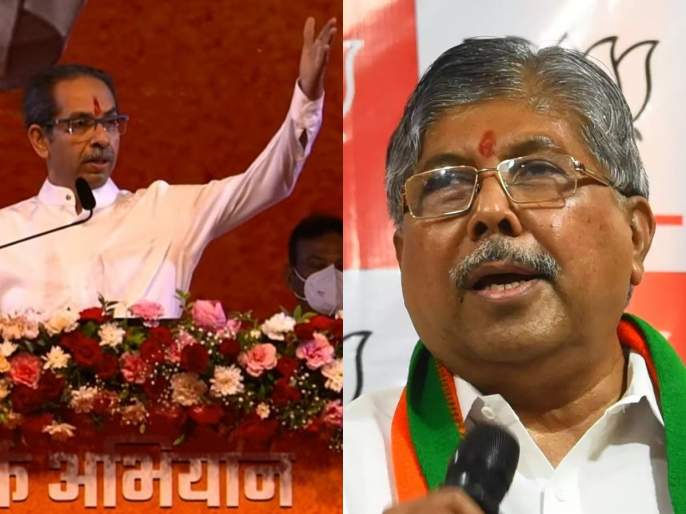 Mumbai: Consistent criticism from BJP leaders, the bhongya issue raised by Raj Thackeray and the issue of Hindutva. On the other hand, due to the constant criticism of Shiv Sena by the Rana couple and the opposition, as announced by Chief Minister Uddhav Thackeray, they had a strong meeting at BKC ground in Mumbai today. In this meeting, Tourism Minister Aditya Thackeray spoke on development works and informed about the work done by the state government. After that, Chief Minister Uddhav Thackeray fired at the opposition. He also said that BJP will bring Dawood and make him a minister. Now, the BJP has retaliated against the Chief Minister’s speech.

Uddhav Thackeray targeted BJP on the issue of Hindutva. However, the BJP was also targeted by the criticism leveled by ED, CBI and IT. Reacting to Uddhav Thackeray, BJP state president Chandrakant Patil said that the leader who had financial dealings with Dawood was in his cabinet. He also criticized Uddhav Thackeray for forgetting the post of Chief Minister.

Shiv Sena chief Uddhav Thackeray, while addressing a rally in Mumbai on Saturday, forgot to speak on several important issues of the state’s development. He himself forgot the responsibility of reducing the price of petrol and diesel. You also forgot that you have put in the cabinet someone who deals with David’s gang. He seemed to have forgotten the post of Chief Minister. Expressed by Chandrakantdada Patil.

Yet he remains in the ministerial cabinet

He said that BJP will make Dawood a minister, a remark made by Uddhav Thackeray. But they have forgotten that there is a minister in their cabinet who is accused of financially colluding with his associates in a way that would help Dawood Ibrahim’s gang financially. Though the leader had to go to jail, Chief Minister Uddhav Thackeray has retained him in the cabinet.

The state should reduce VAT

Uddhav Thackeray asked the opposition why they are not talking about inflation. He was also angry that the Prime Minister had asked him to reduce taxes on petrol and diesel in the state. But, Uddhav Thackeray forgot that by reducing the VAT rate on petrol and diesel, his government can give a big relief to the people of Maharashtra from inflation. Gujarat and other states have given such relief. Forgetting one’s own responsibility to reduce inflation and asking questions of others is a sign of forgetting to be the Chief Minister.

He did not speak on the basic issues of the state

He said that due to his government the reservation of Maratha community is gone and the government is not doing anything to get it back, OBC’s political reservation is gone, load shedding has started again in the state, power connections of farmers have been cut off, thousands of acres are still standing So the farmer committed suicide. He did not even mention many such important questions. Uddhav Thackeray, who described the school work done by Mumbai Municipal Corporation as development work, saw that he had forgotten that he was the Chief Minister.

Rbi Governor Shaktikanta Das Said Interest Rate Increased Due To Many Global Problems Simultaneously Our Monetary Policy As A Way To Keep The Economy...

The program was created by a minor student from Tamil Nadu, a Telegram user bought it for $ 200 and sent threatening e-mails to...

PM Modi likely to visit Hyderabad on May 26 PiPa News