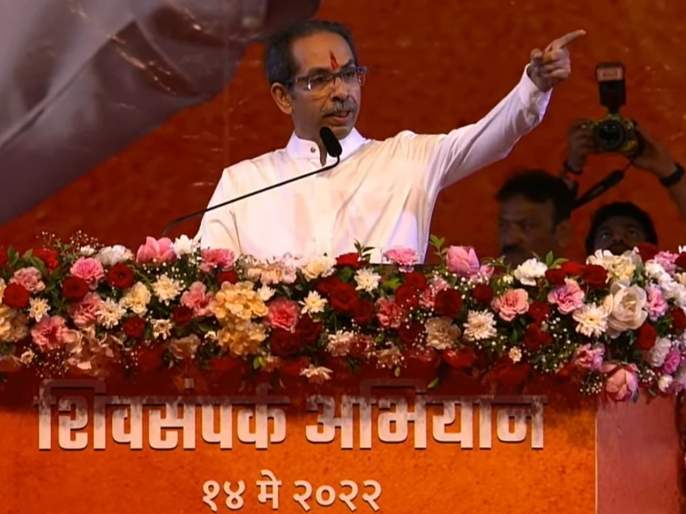 Mumbai: His ugly face has come to the fore as the veil of Hindutva of BJP has been completely torn off. Devendra Fadnavis wants to make Mumbai independent, that is what his owners want; But he also warned that no matter who comes with your boss, only those who break the shackles of Mumbai gained by martyrdom will be torn to pieces.

The meeting was attended by a huge crowd of Shiv Sainiks from all over Maharashtra. In his speech, Uddhav Thackeray slammed the BJP, the central government and Devendra Fadnavis. BJP wearing the veil of false Hindutva is working to mislead the country. Failure to stop the ongoing killings of Kashmiri Pandits, rising inflation, led to attacks on the BJP.

– Some people feel like they are Balasaheb now, they are walking around wearing saffron shawl. Like Munnabhai in ‘Lage Raho Munnabhai’, he has become ‘Chemical Locha’.

– Munnabhai is walking like this. Uddhav hit the ball without mentioning Raj Thackeray’s name.
At the end of the movie, ‘Apan ke bheje me kemikal locha hoyela hai’ is the only thing that Munnabhai realizes, he pointed out the change in Raj’s role.

Devendra, Babri would have fallen because of your weight

– I was there when Babri Masjid was demolished, you say Devendra. How old were you at that time and how much do you talk?

– Have you been on a school trip?

– Hey! Even if you had put one foot down to make Babri fall, Babri would have fallen because of your weight, said Uddhav.

CPRI Shimla: Garlic will now protect potato crop from diseases and pests, scientists come up with a new model of farming together | ...

‘The trend of Bollywood will never end’ PiPa News

The government will increase the price of petrol and diesel by Rs 30 more: Hamad Azhar claims PiPa News

Realme Pad X: Realmy tablet that you can get away from .. impressive features at a low price .. | Realme launches new...