Uruguay vs South Korea match enfs in a draw 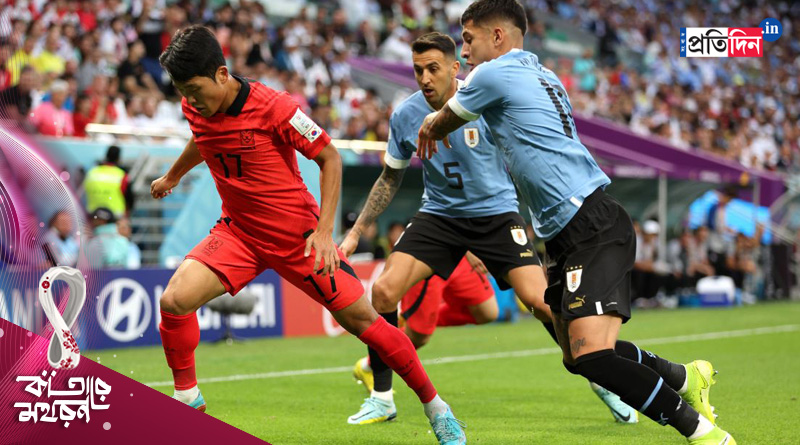 Uruguay–0 South Korea–0
Dulal De, Doha: Asia’s gap with South America and Europe is gradually decreasing. Argentina lost to Saudi Arabia in Qatar World Cup 2022. Japan beat Germany with a storm of speed. Today, Thursday, South Korea stopped Suarez-Cavani’s Uruguay in a close fight. Asia’s football power has once again shown the truth on the world stage – Asian football is progressing. It can be seen that Asia is no longer a duriani in football, they can also push the big team.

South Korea has always been a force in Asian football. They possess the ability to speed up any opponent. Four years ago, South Korea stunned Germany in the group stage. On this day, South Korea stopped a star-rich team like Luis Suarez, Cavani, Diego Godin. He gritted his teeth and fought. In the first half of the game, Hwang of South Korea reached the place to score. He could not keep the center in the right goal. The Uruguayan defense was shaken by the intensity of the attack. Diego Godin’s header hit the bar before the break.

The end of the match was enough to get the blood pumping. Uruguay and South Korea attack. It could have been a goal at any moment. Uruguayan Valverde’s shot rattled South Korea’s post late in the game. South Korea did not become Japan or Saudi Arabia despite fighting hard. But it goes without saying that South Korea will become more aggressive as the tournament progresses.

Even Ben Stokes was stunned by Pakistan’s mystery spinner Abrar...

Rohit Sharma, if i don’t play for the team… Rohit...

Meeting of Bombay friends at KPCC; A village bird...

Rohit Sharma, if i don’t play for the team… Rohit Sharma’s tweet went viral all over the world when he was injured Pipa News