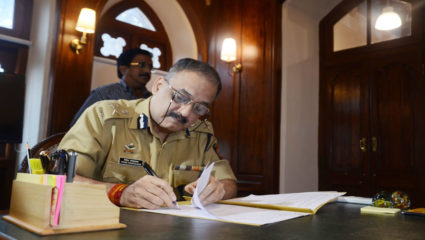 Mumbai: The police of the country’s financial capital Mumbai has got its new boss. Vivek Phansalkar took over as the 77th Police Commissioner of Mumbai on Thursday.

At the same time, IPS officer Archana Tyagi has been given additional charge of Maharashtra State Police Housing DG. Which was with Vivek Phansalkar and became vacant after he became the Mumbai CP. Phansalkar has already served in several departments in the Mumbai Police.

During this, newly appointed Police Commissioner Vivek Phansalkar said that the safety of citizens in the city is the priority. Citizens going to the police station will not come back disappointed, such arrangements will also be made. Along with this, he said that along with the safety of the citizens in the city, the safety of women and senior citizens will be given priority. Vivek Phansalkar, while describing the challenge of cyber crime, traffic and crime in Mumbai, said that my first priority is to control it. Mumbai Police is able to control this.

double helmet and sunday street will be considered

Change in duty for eight hours as needed

Vivek Phansalkar said that it has been decided to give eight hours duty to the police personnel in Mumbai. At present, this has been changed back to 12 hours. Keeping in view the law and order in the city, changes will be made in it as per the need. All employees will be on duty for eight hours.