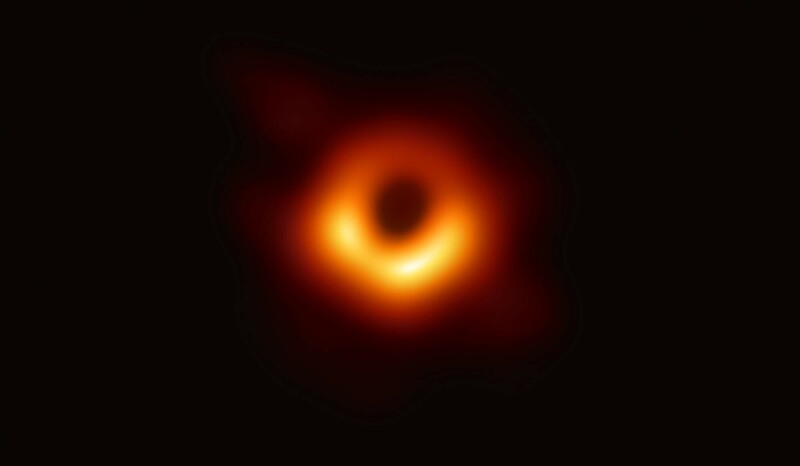 Scientists have released the first image of the enormously huge black hole found at the center of our Milky Way galaxy. Astronomers have nicknamed it ‘Gentle Giant’ because of its ability to devour any matter within its massive gravitational pull but they say it is ‘eating very little’ compared to its size.

Called Sagittarius A *, the body is estimated to be four million times the mass of our sun and is the second ever photographed black holes.

The image shows a central dark region where the hole resides, circled by an orangish-red light radiating from super-heated gases accelerated by immense gravitational pull. The cirlce or ring is roughly about 60 million kms, or 40 million miles, almost the size of Mercury’s orbit around our Sun.

Black holes are astonishingly dense bodies with pull of gravity so strong that not even light can escape, that makes it extremely difficult to view them. Anything from stars to planets and to gas and dust or any form of electromagnetic radiation that falls into the event horizon of the black hole gets absorbed into nothingness.

Located at about 26,000 light-years from the Earth, scientists believe that the distance is enough for us to be out of danger.

Event Horizon Telescope (EHT) international collaboration achieved the feat of capturing the image just as it did in 2019. Back then, it revealed the first photo of a black hole present in another galaxy.

Messier 87 or M87, as it is known, is estimated to be a thousand times bigger black hole, approximately at 6.5 billion times the mass of our Sun.

Due to its distance from the Earth, Sagittarius A * appears a tiny pin hole on the sky. To capture such a challenging target, incredibly high resolution is required.

Getting an image of the Sagittarius A * was a relatively challenging task due to the size of the black hole – a thousand times smaller than the M87 black hole. Its ring structure also changes one thousand times faster on the timescale.

Dr Ziri Younsi of University College London, UK, was part of the team that captured the blac hole. “It’s very dynamic. The ‘hotspots’ you see in the ring move around from day to day, ”she told the BBC.

Michael Johnson, an astrophysicist at the Harvard-Smithsonian Center for Astrophysics, said that both black hole photos appear blurry because capturing them pushed the capability of the telescopes to the breaking point.

The Milky Way is a spiral galaxy containing at least 100 billion stars. Whether viewed from above or below, it looks like a rotating pinwheel, where our sun is situated on one of the spiral arms and Sagittarius A * is located at the center.

Johnson said Milky Way’s black hole is “ravenous but inefficient,” which is at present consuming matter very slowly. “If Sagittarius A * were a person, it would consume a single grain of rice every million years,” Johnson mentioned. It is releasing only a few hundred times the energy of the sun despite being much bigger in size.
[1]: https://twitter.com/AajNewsEnglish/status/1525499941409415168

The Pakistani nation has the potential to change its destiny, President PiPa News

Full blockade in Kashmir on May 21: Call for Hurriyat organization

The girl is beautiful .. Does the vehicle stop asking for a lift? Find out more – News18 Telugu