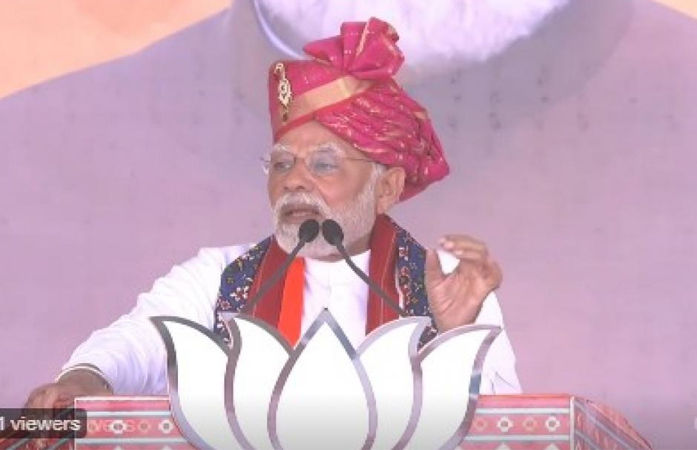 Voting for the first phase of the election is going on today. On the other hand, political parties are also campaigning heavily. Prime Minister Modi has visited Gujarat for two days. He will have a grand road show in Ahmedabad today. He addressed a massive public gathering in Kalol. He said that the enthusiasm of those watching me on mobile and TV must have increased. We have now emerged as the largest mobile phone manufacturing country in the world. When you sent me to Delhi in 2014, there were two mobile phone manufacturing factories, today there are more than 200. No one thought before 2014 that India could make such a big revolution in the mobile world.

The rites that Gujarat has given me, this Congressman is shocked

He said that when the first phase of voting is going on in Gujarat today, voting is being done very peacefully in a manner that reflects the pride of Gujarat. Now that I am in the footsteps of Mahakali, I am sure that there is going to be a record breaking turnout. The enthusiasm of those who watch me on mobile TV will also increase. Today and tomorrow are almost the last leg of my journey. Wherever I had the opportunity to go, I found an unprecedented enthusiasm that would not have been possible without faith.

India now holds the presidency of the G-20 summit

Today is December 1, this is the last day of 2022. I am proud that December 1 is an important event of the whole world that today India has assumed the presidency of the summit of G-20 countries of the world in Kalol. With the blessings of black in today it starts auspiciously, the fragrance has mingled with gold. This represents 75 percent of G20 group trade. The countries that lead it are the most economically active countries in the world and it is chaired by India. Indians rejoice over it. We have to take the opportunity of this G20 as an opportunity to make the whole world feel the sting of India.

When I used to come, there were no road markings

Kalol, Halol, Vadodara all these were my daily visits. It is a pleasure to travel the whole belt when you come here on a scooter. Seeing you gives me strength. In those days when I was coming, no roads, no electricity, no water, no one imagined that this whole belt would stand as a great strength. Small items were also imported from abroad. Employment opportunities should arise due to bringing goods from outside and chopping them. Had that work been done 40 years ago, the employment would have been full. This country has never recovered because of it.

Man who stole 18 units of rocks in Nella can...

Students received a great gift in the field of education;...

People thanked the central government for the change in income...

Uber gave a job, worked for a few months and...

Union Budget 2023: Finance Minister Nirmala Sitharaman, while presenting the budget for the year 2023-24, said such a thing that everyone started laughing, know...

Man who stole 18 units of rocks in Nella can pay Rs 25,000 to District Mineral Trust and get bail: ICourt Branch orders Pipa...

Students received a great gift in the field of education; Now the epidemic will not be a hindrance in studies, know what is...