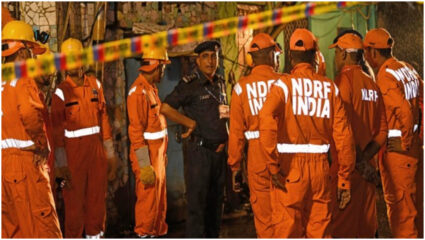 6 NDRF teams were deployed in parts of Tamil Nadu following heavy rain warning. In view of IMD alert regarding low pressure over South Andaman Sea, 6 teams of NDRF Arakkonam have been deployed at Nagapattinam, Thanjavur, Tiruvarur, Cuddalore, Mayiladuthurai and Chennai. It is very likely to move west-northwestwards and concentrate into a depression over southeast Bay of Bengal.

In Lucknow, the capital of Uttar Pradesh, the minimum temperature can go up to 11 degrees. Due to the drop in temperature, the cold has increased here. With the onset of winter in Delhi, the mood is also changing along with the wind. Fog and mist have troubled people in the morning.

According to the Indian Meteorological Department, the minimum temperature in the capital Delhi reached 8 degrees today on Tuesday. In most of the areas, there was fog and mist in the sky since morning. According to the System of Air Quality and Weather Forecasting and Research (SAFAR) of Delhi, today’s Air Quality Index (AQI) is 337 (in very poor category). Some pictures are of Akshardham and Yamuna Bank. Which is surprising.

Shinde Dammante should compete against me: Aditya Thackeray Pipa...

Shinde Dammante should compete against me: Aditya Thackeray Pipa News

The US announced $2.2 billion in military aid to Ukraine Pipa News

The Quebec hip-hop scene is more bilingual than ever, but the language headache remains Pipa News