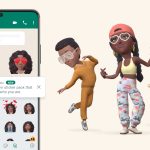 WhatsApp has started rolling out 3D avatars for its users around the world that can be used as profile pictures or custom stickers – months after their debut on Instagram, Facebook and Messenger.

In a blog post, WhatsApp said users could use personalized avatars as their profile picture or choose from one of 36 custom stickers that reflected different emotions and actions. Avatar stickers on WhatsApp are similar to Snap’s Bitmoji or Apple’s Memoji stickers.

Your avatar is a digital version of you that can be created from billions of combinations of different hairstyles, facial features and outfits.

WhatsApp also said users would get style improvements over time, including lighting, shading, and hairstyle textures.

Users can create their avatars on WhatsApp – once rolled out – by going to the Settings menu. The messaging app is also getting a “Use Avatar” option in the profile picture settings to let users make their virtual lookalike their profile picture, according to details available on an FAQ page.

In 2019, Meta introduced Bitmoji-style 3D avatars to Facebook and Messenger. The initial rollout was limited to markets like Australia, New Zealand, Europe and Canada, though the social networking giant expanded its presence to the US later in 2020. At the end of January, Instagram also got avatars.

10 Indians stranded in remote areas of earthquake-hit Turkey, but...

Surfer Bethany Hamilton says she will not compete in WSL...

Ukraine brings back 128 children forcibly taken to Russia by...

Bank of Canada publishes summary of interest rate deliberations for...

Railways has earned over Rs 600 crore so far from...

After 25 years, Raveena Tandon spoke openly about her breakup with Akshay Pipa News