When the Badal family was in government, why did they not get the All India Gurdwara Act passed by their partners? : Iman Singh Maan | Punjab News Pipa News

When the Badal family was in government, why did they not get the All India Gurdwara Act passed by their partners? : Iman Singh Maan | Punjab News 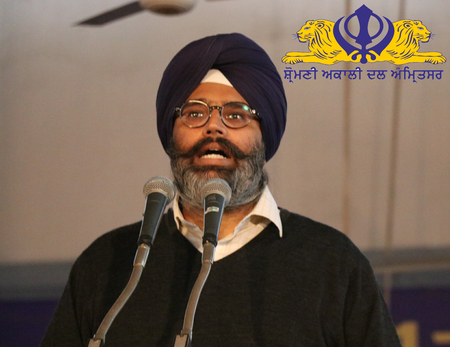 Chandigarh – “Today when the Jamaat BJP-RSS, which has been a political partner of the Badal family for a long time. In order to maintain their political power in the entire country and to fulfill their selfish interests, the rulers of the Khalsa Panth created a separate Sromani Gurdwara Management Committee of the Haryana state by following the British policy of ‘divide and rule’. has done and got a legal decision to separate him from the Supreme Court of the country, then now there is no moral, social and immoral right left with the Badal family to shed crocodile tears by using folk rhetoric to mislead the Sikh community. to take action When he was in power, if he had sincerity for the Sikh community and the state of Punjab, then he would have taken the responsibility of his partners to put the All India Gurdwara Act on the table of the Parliament and get it passed by taking immediate action, then there would have been some solidarity. But today in the newspapers and media, they are making noise about the formation of separate Haryana Gurdwara Parbandhak Committee, which is completely useless and misleading to the Sikh community.

This idea Iman Singh Maan Patron Youth Shiromani Akali Dal (Amritsar) Sukhbir Singh Badal and Badal Dalia, after the decision of the Supreme Court to separate and recognize the Haryana Gurdwara Management Committee, terming the shouting action as misleading and creating a drama to prove themselves to the Sikh community. While talking about their irresponsible actions, they expressed their guilt for such actions. He said that when they were intoxicated with power and the entire Sikh community, whether they were scattered in Punjab, India or abroad, there was a strong voice that the All India Gurdwara Act should be brought into existence. For which the draft was also ready. But at that time, instead of fulfilling the responsibility, this Badal family started campaigning that we should take care of what we have, whether Sikhs from outside provinces and Sikhs from foreign countries will support us for the All India Gurdwara Act. were being given because their partner class BJP-RSS. This Badal family was working on the thinking of and has been working till the end of political power. Today, there is no reason for them to make non-argumentative statements, but they should ask their souls whether they have fulfilled their national responsibilities in the past with sincerity or otherwise, they will get the right answer.

This entry was posted in Punjab.

This is DMK, the aim of the regime? : BJP, – SC, Team Leader Kumural Pipa News