With the Afghan people in the hour of sorrow: Shahbaz Sharif’s telephone call to the Afghan Prime Minister 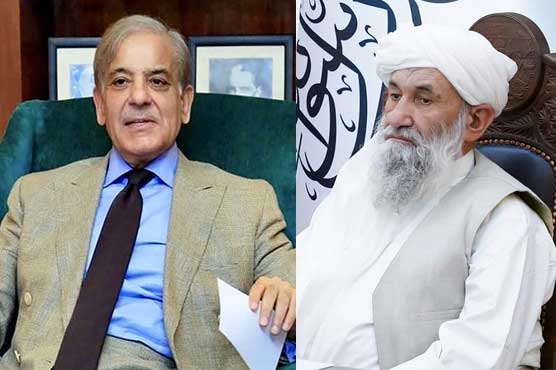 ISLAMABAD: (Web Desk) Prime Minister Shahbaz Sharif during a telephone conversation with the Acting Prime Minister of Afghanistan Mullah Hassan Akhund said that he stands with the Afghan people in this hour of sorrow.
The Prime Minister had a telephone conversation with the Acting Prime Minister of Afghanistan. On this occasion, Shahbaz Sharif conveyed the deep sympathy of the Government of Pakistan and the people of Afghanistan for the loss of precious lives as a result of the devastating earthquake that struck Afghanistan on June 22. Expressed condolences.
The Prime Minister prayed for the forgiveness of the deceased and speedy recovery of the injured.
He reiterated that Pakistan stands shoulder to shoulder with its Afghan brothers in this difficult time.
During the telephone call, Shahbaz Sharif elaborated on the relief efforts being made by Pakistan to provide emergency aid to Afghanistan, including the delivery of emergency medicine, tents, tarpaulins and blankets.
Shahbaz Sharif informed his Afghan counterpart that Ghulam Khan and Angor Ada border crossing points have been opened for treatment in Pakistani hospitals. We will continue to support the neighboring country in the days to come.
He emphasized the close fraternal ties between the two people and reiterated Pakistan’s commitment to provide assistance to the Afghan people facing a dire humanitarian situation.
The Prime Minister also briefed the Acting Prime Minister of Afghanistan Mullah Hassan Owand on the steps taken by the government to facilitate trade and movement of people through effective border management.
He further said that Pakistan is committed to strengthening bilateral relations to promote the goal of peace, development and prosperity.

No grievances with PML-N, no doubt about the intentions of Zardari and Bilawal, there are some reservations about the elections: Wasim Akhtar

The weather will remain hot across the country today, the Meteorological Department forecast

Is Russia on the verge of bankruptcy?

The decision to increase the Petroleum Levy, Steel Mills and PIA is beneficial if one buys for one rupee:

In Bihar, BJP MLA Rashmi Verma is in danger of life from her own worker

Bhuvneshwar Kumar made history in the T20s

If you don’t, my name is not Aditya; ‘Thackeray’ warning to MLAs in Shindesena – Marathi News | Minister Aditya Thackeray has...

After stealing gold from Bilara, the youth fled from Pali, seeing the police, the gold hid under the seat of the bus, was caught....

Rythu Bandhu: Good news for farmers .. Opportunity for new beneficiaries in Raitubandhu .. This is the cut off date ..